Through the Writer’s Eyes: Professors, Perfidy, and Poison in a Pig Pen 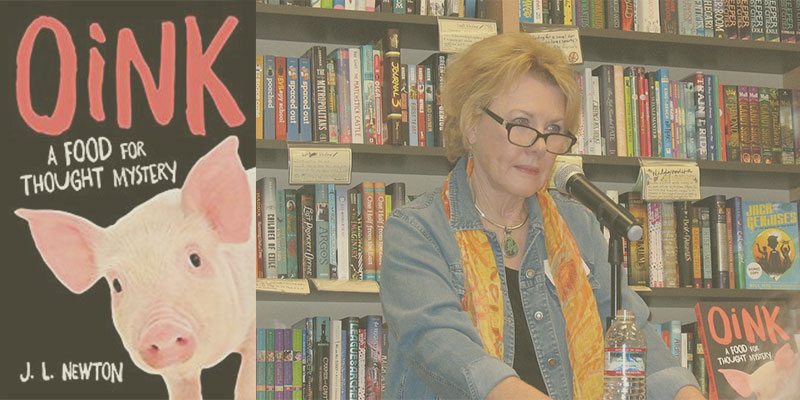 The tall and gracious Professor Emerita, Judith L. Newton, held the book launch celebration for her debut novel one recent evening at Books Inc. in Berkeley. The star of the evening was Oink, A Food for Thought Mystery (She Writes Press), the first in a series showcasing the protagonist Emily Addams, a foodie professor of women’s studies at fictional Arbor State University.

Oink arises from Newton’s life-long work for social justice and equity in academia, and front row seat at the corporatization of the modern university. The book is a mystery in which a prominent white male professor of Plant Biology is poisoned. The reality of campus politics is uncovered, layer by layer, to reveal ugly inter-departmental competition, administrative hierarchies, the struggle for program funding, the sexual harassment of women, and the entrenched tension between the sciences and humanities on campus.

Emily learns she is a suspect in the poisoning.  We become enmeshed in her attempts to prove her innocence. In the process, we explore the anatomy of a major university: the hierarchy of its leadership, politics, finances, and history. We are confronted by the disparate groups of educators, departments, and wide array of philosophies which struggle to define the school’s mission.

Professor Newton knows whereof she writes. She was the first paid director of the Gender, Sexuality, and Women’s Studies Program at U.C. Davis. She is also a past director of the university’s Consortium for Women and Research, a group dedicated to the promotion of professional advancement for women scholars, the fostering of interdisciplinary research, creative work, and dialogue on issues relating to women and gender at the university. Professor Newton is a gentle and approachable woman who emanates warmth, intelligence, and sincerity, and one who is obviously at ease addressing an audience.

No stranger to writing and publishing, Professor Newton is the author and editor of five scholarly works, the most recent of which is From Panthers to Promise Keepers: Rethinking the Men’s Movement (Rowan & Littlefield Publishers, Inc. 2005). Others are Starting Over: Feminism and the Politics of Cultural Critique (University of Michigan Press, 1994); Women, Power, & Subversion: Social Strategies in British Fiction 1778-1860 (Methuen, 1986), Feminist Criticism and Social Change: Sex, Class, and Race in Literature and Culture (Deborah Rosenfeld, ed., Methuen, 1985) and Sex and Class in Women’s History (Mary P. Ryan and Judith R. Walkowitz, eds., Routledge & Kegan Paul, 1983).

Newton’s memoir, Tasting Home: Coming of Age in the Kitchen (She Writes Press 2013), received an impressive Publisher’s Weekly starred review and twelve literary awards. It was a Finalist in the Foreword Reviews 16th Annual Book of the Year Awards in 2014. (Foreword Reviews is the only review magazine exclusively dedicated to discovering new indie books.) Newton writes a blog, has published many essays and articles, and has had many pieces published on Huffington Post since 2013.

After Tasting Home, she turned her attention to writing fiction, which she describes as “the most difficult form of writing.” An admirer of Tony Hillerman’s fiction, she said, she set out to create a main character who, like his, is marginalized. She stated that she sought reader engagement by creating a quirky female sleuth who undercuts the stereotype that imagines feminists are devoid of humor, hate men, are indifferent to fashion and domesticity. She wanted to write a mystery which also has elements of humor and playfulness. She has succeeded with flying colors.

Oink falls within the “cozy mystery” genre, as opposed to “thriller.” Written in the first person, it contains beautiful sensorial prose, rich with color, smells, tastes, and textures, as well as recipes. Emily is a single mother and a feminist who is not only sensitive to the moods and rights of others, but is an intellectual with a strong aesthetic sense and love of cooking. She is an admirable and complex character. Because the poisoned professor, Peter Elliott, had been developing a new strain of genetically modified corn (before he was found unconscious in the stinky campus hog pen), much of Emily’s culinary attention is drawn to corn-based foods, as are the recipes in the book. There is much to love in Oink.

For Professor Newton, food not only nourishes, it is political. When those of opposing viewpoints are able to come to the table, listen to each other, share food, and find ways to blend their own needs with those of the larger group, big possibilities open up.

On to writing her second novel in the Emily Addams series now, Newton describes her current effort as one involving secrets, exploited labor, a search for one’s roots, winemaking, and the “preciousness of the wine tasting culture.”  More food for thought is in store for Newton’s fans.

Those interested may meet Judith Newton this summer at the Bay Area Book Festival in Berkeley, CA on June 3rd and 4th, and may hear her speak at the She Writes Press Mystery Authors Tour in several California locations including Emeryville, Corte Madera, San Francisco, Palo Alto, Encinitas, and more. Updates will be posted on her website at www.judithnewton.com.