Through the Writer’s Eyes: The Fruits of Kate Jessica Raphael’s Forays into Palestine 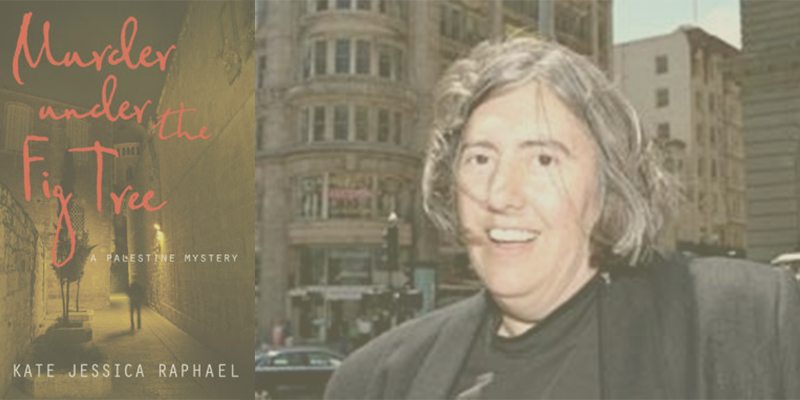 Ms. Raphael is a prolific thinker and author who has produced yet another fine novel amidst her many other worthwhile endeavors. For example, she hosts a weekly radio program on KPFA/Pacifica (“Women’s Magazine”), and has done so for years. The KPFA archives hold many of her shows, which air on Mondays at 1:00 p.m. She has served as the grand marshal of the San Francisco Gay Freedom Parade. She writes a concise and thought-provoking blog, Democracy Sometimes (find it here: http://www.kateraphael.com/). She works full time in a San Francisco law firm. She’s active on social media, and remains deeply engaged in world affairs and the political activism which is her life’s blood. About Kate it is absolutely true that her life is her message. She is a walking inspiration: hard-working, experienced, empathetic, articulate, humble, and so very wise. 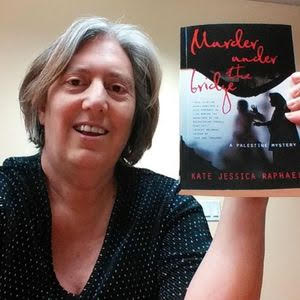 Internationally-bestselling author and human rights activist, Carolina de Robertis, (who is currently an Associate Professor of Creative Writing and literary translation at San Francisco State University, http://www.carolinaderobertis.com/) interviewed Ms. Raphael that night before an enthusiastic audience. They discussed the setting and context in which the books’ stories unfold, how Ms. Raphael came to write them, a brief history of modern Palestine, the writing process, social and political activism, the dynamics of being a writer with views not shared by one’s family of origin, and Ms. Raphael’s goals in writing the Palestine mysteries.

“I do not want to appropriate the Palestinian narrative,” she said, “or claim a legitimacy I do not have. I want to get people interested in what’s happening in Palestine.” She asked many Palestinians and Arabs to read and comment on her draft manuscripts. She wanted “to express radical empathy by writing other peoples’ stories…projecting my consciousness into fictional characters of a real time and place.”

Ms. Raphael was reared in a Jewish family in the southern United States. She described her family as “Progressive except for Palestine – P.E.P.” — whereas she applies no “except” to herself. She describes herself as Jewish and one who is pro-Palestinian, stalwart in her years’ long devotion to the achievement of Palestinian self-determination and freedom through nonviolent means.

Toward that end, she joined the International Women’s Peace Service in 2002, and spent a total of eighteen months during three trips there between 2002 and into 2005 volunteering in Palestine as an international peace worker. During that time, she maintained a detailed journal in which she documented human rights violations and the particulars of accompanying Palestinians during their daily chores, using her international status to protect them wherever possible. She later augmented these 1,000+ pages of observations with further research into the efforts of feminist and labor groups and by studying detailed maps of the area.

In 2004 Ms. Raphael was arrested for her activities in Palestine, imprisoned for a month in an immigration detention center in southern Israel, and was deported after her appeal was denied. Upon returning to California she pondered how best to make use of all that she had learned and recorded. Many of her contacts in Palestine had implored her to “tell people about us,” “tell our stories,” “let the world know what we are going through.”

She chose the fiction/mystery genre as her avenue, because of its great reader appeal and ability to explore “the multiple points of conflict in an occupied country, where loyalties may be shifting and everything is politicized, from what language you speak to what you wear.” She has created wonderfully vivid scenes, believable characters and situations that are so compelling that the reader is swept into Palestine from the first pages, experiencing the strictures of daily life in an occupied land, enduring a system of “justice” that feels more like an Escher painting – where the stairways that appear to go up and out actually do the opposite. Her intimacy with the Palestinian community illuminates not only the plots of her stories, but also the readers’ understanding of the events transpiring in the region.

The series is told through the perspectives of two intelligent and refreshingly unsentimental female protagonists: a Palestinian police woman named Rania, and an American international peace worker named Chloe. The reader is placed at ground zero of Israel’s occupation of Palestine. We must endure the daily fear, logistical challenges, and deprivations of living in an occupied land. We are plunged into village life, where everyone seems to know the business of everyone else, where gossip and rumor can have devastating consequences, and where one never knows when a family member may be taken, or killed, or simply disappear without an explanation. Suspicion is ubiquitous. The availability of resources is never assured. The deck seems stacked against every Palestinian, as ancient struggles and grudges feed present discord, humiliation, fury, and violence. Add to that being female. Add to that being gay.

Murder Under the Bridge is set in 2005; Murder Under the Fig Tree is set six months later. The Palestinians’ beloved leader, Yasser Arafat died on Nov. 11, 2004. He initially opposed the creation of the State of Israel in 1948, founded the Al Fatah political party, and was elected chair of the Palestinian National Council in 1969. Over the years he shifted his approach from one espousing open conflict to one of negotiation. He settled in Gaza City and promoted self-governance for the Palestinian territories, attempting to work with the Israeli government toward a two-state solution to end the conflict. Along with Itzhak Rabin and Shimon Peres, Arafat was awarded the Nobel Peace Prize in 1993 for their efforts in this regard.  After Arafat’s death, Mahmoud Abbas stepped into Arafat’s very large shoes as the leader of Al Fatah, but was much less popular as a leader. And Hamas was on the rise.

Hamas, a Palestinian Sunni-Islamic fundamentalist organization, was founded in 1987 as an offshoot of the Egyptian Muslim Brotherhood. With a social service wing and a military wing, its stated objective is to liberate Palestine, including modern-day Israel, from Israeli occupation, and to establish an Islamic state in the area that is now Israel, the West Bank, and the Gaza Strip. Hamas formed the Change & Reform party, which was very disciplined and out-organized Al Fatah, Ms. Raphael said. Although Al Fatah had the majority of the popular support, Hamas won a plurality in the January 2006 Palestinian Legislative Council elections, defeating Al Fatah.

Ms. Raphael said that people were stunned; they never expected Hamas to win in Parliament. (She likened the situation there in 2006 to the victory of President Trump in the U.S. last year.) A 2017 Palestinian Center for Public Opinion poll in the Palestinian territories revealed that Hamas’s violence and rhetoric against Israelis are unpopular and that a majority of Palestinians would rather Hamas “accept a permanent two-state solution based on the 1967 borders.”[i]

During 2005, the time period during which her novels are set, “Israel went on a rampage in Gaza,” Ms. Raphael said. At the beginning of Murder Under the Fig Tree, Rania has been arrested and is languishing in an Israeli prison. Chloe flies to her aid from the U.S., and they end up investigating the death of a young gay Palestinian man named Daoud. The gay scene was emerging in late 2004. During that time, SWAT, the first gay Palestinian organization was formed.

Ms. Raphael said that while Murder Under the Bridge focuses primarily on the occupation, Murder Under the Fig Tree addresses internal conflicts and social issues against the backdrop of the struggle between Hamas and Al Fatah in a post-Arafat Palestine.

After completing her first novel, Ms. Raphael applied for a residency at the prestigious Hedgebrook Institute, a female writers’ colony in Washington state. Those selected win a month-long stay where they may write in an idyllic setting, with all their needs for food, shelter, and group support provided free of charge.  Hedgebrook is an organization founded to sponsor “Women authoring Change,” to support women writers “whose stories shape our culture now and for generations to come.” Hedgebrook’s “core purpose is equality for women’s voices to help achieve a just and peaceful world.” http://www.hedgebrook.org/

Her application was approved. Ms. Raphael arrived with a 200-page treatment and left with the rough draft of Murder Under the Fig Tree under her arm. She sings high praise and expresses deep gratitude for the vision and sanctuary Hedgebrook provides. Any astute reader cannot fail to grasp the social value of Ms. Raphael’s work or the potential impact of her tireless efforts. Reading the mysteries is a deep and engaging endeavor.

Ms. Raphael has plans for the next book in the series, and will try to participate in NaNoWriMo this November (https://nanowrimo.org/about) to generate the first draft. The goal is to write a 50,000-word novel in 30 days. But first she will be traveling on a book tour to the Midwest this month, as part of “Bright Heroines in Dark Times” – a group of She Writes Press mystery writers who will introduce their excellent new books to readers in the Chicago area. (Their schedule is available on the Events Page of Ms. Raphael’s website.) Fans eagerly await the next book in the Palestine mystery series.

[i] Pollock, David. “The Surprising Opinions of Palestinians.” The Washington Institute. 7 June 2017. http://www.washingtoninstitute.org/policy-analysis/view/the-surprising-opinions-of-palestinians

JENNIFER DWIGHT is a San Francisco Bay Area author and reporter for the San Francisco Book Review. Her novel, The Tolling of Mercedes Bell (She Writes Press 2016), has won 15 literary awards, including the gold medal in Suspense at the 2017 National Indie Excellence Awards.