Through the Writer’s Eyes: An Evening with Ruth Whippman 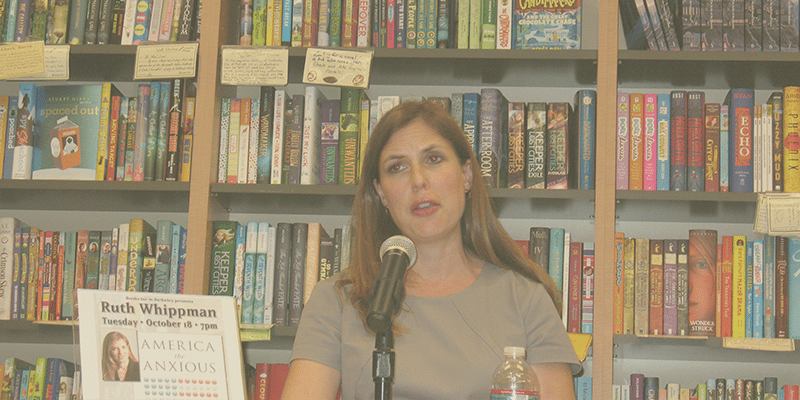 What happens when a British documentary filmmaker and investigative journalist with a wicked sense of humor uproots herself to California when her husband takes a job at a Silicon Valley start-up? She explores her new environs, of course, and is confronted with its lexicon. Culture shock hits hard, and the same topic keeps rearing its ugly head in her efforts to make friends and belong to her community. She hears a lot of talk about happiness in a sea of anxiety.

And so began the quest of Ruth Whippman to come to grips with a conundrum and to ferret out its causes and effects. Here in the Land of Plenty, people are not happy. We lead the world in clinical anxiety and, according to a study of the developed countries reported by the World Health Organization, the U.S. ranks two slots behind Rwanda for happiness…a jolting statistic, to say the least. Why? How do we know this? How are the data gathered and analyzed? Who funds the studies? Is the search for happiness causing unhappiness? One thing is indisputable: the evaluation of whether one is happy, or on the road to becoming happy, has now bled into the language of the work place, parenting, academia, science, religion, journalism, and is itself an industry. 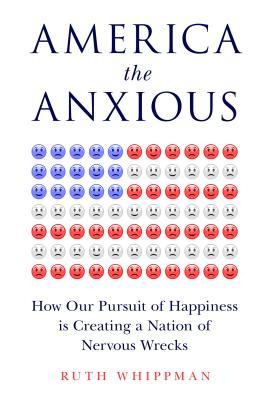 I had the good fortune of hearing Ms. Whippman speak about her investigations into America’s $11 billion happiness industry one evening at Books Inc. in Berkeley, as we celebrated the release of her rich, fact-filled new book. It is America the Anxious: How Our Pursuit of Happiness Is Creating a Nation of Nervous Wrecks (St. Martin’s Press/Macmillan, Oct. 4, 2016), a splendid, funny, and thought-provoking work which was named one of the 40 best books of 2016 by The New York Post, a New York Times Editor’s Choice selection, one of Newsweek’s Nine Books to Change the Way You Think in 2016, and one of Bustle’s best non-fiction books of October 2016.

Research took Ms. Whippman to many different venues in several states. She attended quasi-spiritual self-help seminars. She met with scientists at U.C. Berkeley at the Greater Good Science Center, which promotes “The Science of a Meaningful Life” – see http://greatergood.berkeley.edu- and gathers happiness data from test subjects. She went to Zappos corporate headquarters, as well as a Utopian planned community.

She explored the positive psychology movement, and its insistent message that we are responsible for our own happiness, that circumstances don’t matter because it’s all about attitude. If one has a more positive attitude, one need not focus on one’s problems, even those of grinding poverty. She also made striking discoveries about the sources of funding for many studies and seminars promoting the positive psychology movement – captains of industry who benefit from a workforce constrained to lower earnings, whose despair must be managed for the financial gain of others. Newsflash: when the financiers are invested in the outcome of the studies, there is a very real problem with conflict of interest.

Ms. Whippman stayed with a Mormon family in Utah to explore why Mormons are consistently ranked as among the happiest people in American at the same time that “Mormon Utah also has the highest rate of antidepressant use in the United States, with records released by prescription drug companies showing that the rate of prescriptions for depression medication in Utah is around twice the national average.”[i]  Women may be the problem, it seems. They just can’t seem to stay as cheerful on the inside as they must appear on the outside.

So where did the quest lead? To the conclusion that we need to spend less time searching for meaning, less time at work, and more time living our lives. People need a sense of community. People need time to develop relationships, more time for rest, and a social safety net. It turns out that quality of life need not be complicated, or engineered, or “managed” – just allowed, in an environment of respect where the basics of life (affordable food, housing, medical care, education, and work) are available to more than the privileged.

JENNIFER DWIGHT is a San Francisco Bay Area author. Her books include nonfiction legal works and a suspense novel, The Tolling of Mercedes Bell, which was a finalist in the 2016 Indie Next Generation Awards for Thriller and Suspense. The San Francisco Book Review called it “an unforgettable page-turner – a must-read by all!” It has also received excellent reviews from Suspense Magazine, Sunset Magazine, the Portland Book Review, Coastal Living Magazine, Kirkus Reviews, Working Mother Magazine, Brit + Co, BuzzFeed, The Reading Room, and many on-line review blogs. Please visit her website, where there are links to her writings, social media, and information about her upcoming events.