Through the Writer’s Eyes: An Evening with Barry Eisler By Jennifer Dwight 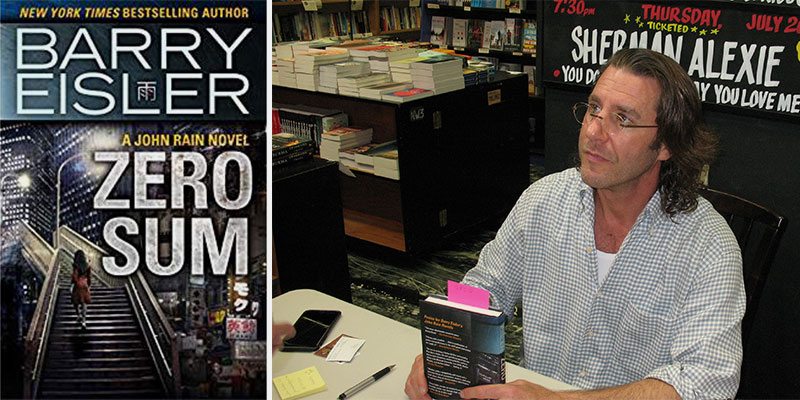 Barry Eisler, beloved and prodigious author of thrillers, celebrated the release of his thirteenth novel, Zero Sum, at Kepler’s Books in Menlo Park, CA recently. During the introduction, author Keith Raffel aptly compared Eisler to John le Carré for his tightly-plotted novels, rich with spy tradecraft and understated prose, based on real-life experience as a former government covert intelligence agent.

If you’ve never seen Barry Eisler speak in person, you’re missing out big time. He is a lightning rod of wit, irony, pithy observation, and irreverent humor reminiscent of George Carlin. He is in his early 50’s now, has a lean build of medium height, wears his dark hair on the long side, and sports a week’s dark beard. His dress was casual – a collared shirt, untucked, with the sleeves rolled up, over jeans and soft-soled shoes. He began with prepared remarks, looking like a relaxed valedictorian, but soon the door opened to his spontaneous, hilarious self and the stories begin rolling.

Zero Sum is the ninth novel about the anti-hero, John Rain. It is set earlier in time (1982, Tokyo) than previous novels in the series in order to show the character’s earlier self, Eisler explained, when Rain is “still poisoned by testosterone,” and to depict a stage of his evolution as a master assassin. Perhaps there was also light to be shone on the geopolitics of the Reagan era (or, indeed, the meddling of the USA in general), some of the fallout of glasnost, and the causes of the CIA’s disrupting influence in Japanese politics.

It is indisputable that a colorful Russian gangster named Victor demanded emergence from the vault of Eisler’s lively imagination. Victor’s voice was irrepressible even at the book launch party, as the author read an early scene from the book in which Rain and Victor become acquainted. Although both characters are half Japanese, Victor’s voice in English is thickly accented by his formative years in Russia, drips with ego, intrigue, and attempted intimidation, while Rain absorbs details and displays insouciance. (Eisler narrates the audio versions of his books and stories, and has received at least one award for his skill in doing so.)

Eisler’s personal professional history has been the perfect incubator for his characters and the succinct novels he writes. He was graduated from Cornell Law School in 1989, after which he joined the CIA, took the twenty-week field tradecraft course, and then held a position on the covert operations team. He later practiced law in the technology field, several years of which were in Japan, and earned a black belt in Judo along the way.

At Kepler’s, he was quick to deglamorize the CIA, which he described as a “huge, shambling government bureaucracy,” the right hand of which does not know what the left is doing – “like the Post Office or the DMV, but with spies.” He had the audience in stitches with stories to illustrate why he left the Agency in 1992.

At that time, he joined the well-known law firm Weil, Gotshal & Manges[1] and went to work in the firm’s technology licensing division in the San Francisco Bay Area. His legal career subsequently took him to Japan where he became in-house counsel for Panasonic. In 1999, he returned to the Bay Area to join a Silicon Valley technology start-up company, until John Rain came knocking and the fiction began to pour out of him.

Ingredients in the Secret Sauce

Barry Eisler is gifted, yes, and he has also been highly trained to see and analyze, act and describe. He is well-seasoned by education and experience. He works hard at his craft, and has averaged writing at least one book each year.

He says he gets a lot of his material “from actual U. S. government craziness (assassinations, torture, indefinite imprisonment…you know, everything needed these days to Keep Us Safe)[2]” and from living in a “metastasizing surveillance state.” He has written that “[a] lot of what I’ve speculated about turns out to be true: the kill list, or “International Terrorist Threat Matrix,” I introduced in 2004 in Winner Take All, for example, came to light in 2012 and 2013 as the “Disposition Matrix,” courtesy of the Obama administration. The safety shortcomings of Japanese nuclear reactors I described in 2003 in A Lonely Resurrection were documented following the 2011 Fukushima catastrophe. And the pacemaker hack that kicked off my first book—A Clean Kill in Tokyo, in 2002—turns out to have been a real concern of Dick Cheney’s, as revealed in his memoirs (it also turned up in the second season of Homeland).”[3]

Eisler has a lawyer’s eye for social issues and exactitude. He packs meaningful detail into descriptions with rich vocabulary, researches his material in depth (and publishes his sources), and is a master of dialogue. And if you see him speak in person, you cannot miss his warmth, his sense of justice, his wicked humor, and intelligence.

Eisler is also a great role model for indie authors. He was one of the first wildly successful traditionally-published[4]  authors to break away and self-publish.  For eight years, beginning in 2003, his novels were published by arms of Penguin Random House. His first five John Rain novels were published by Putnam. (His first novel won the 2005 Barry Award for Best Thriller and The Gumshoe Award.) Then he switched literary agents and sold two stand-alone thrillers, Fault Line and Inside Out, to Ballantine, for a reported seven figures. (Fault Line (2009) became a New York Times bestseller.) Eisler’s novels have been published in numerous countries and in many languages. In March 2011, Barry Eisler made big news in the indie world when he walked away from a $500,000 advance offered by St. Martin’s Press, for two books, to enter the brave new world of self-publishing. Regaining creative control of his work, he said, was “a very big factor” [5] in this decision.

As soon as Eisler reacquired the rights to his first five novels, he changed their titles. He could not discuss the specifics of his “amicable” departure from Putnam, which are confidential, but he did say that the publisher’s choices of titles had felt “gimmicky” to him, and always bothered him. He wanted his books to have the titles he had given them, rather than titles that fit with a publishing house’s marketing formula.

An Aside About the Artist’s Conundrum

The tension between the creative control of the art, on one hand, and the business side of marketing it to generate revenue, on the other, is a frequent source of angst among writers and other artists. The creative life requires the artist to heed inspiration and imagination and then produce. The art is alive and often ventures into unexpected directions that the artist must follow in order to express it. This magic is the core of creativity, and is antithetical to the methods employed by the non-artist business heads who capitalize on it.

The traditional publisher or art gallery views artistic expression as a product to be valued and sold, so concerns itself with “hooks” to grab attention, the artist’s name recognition, image, “platform,” previous sales statistics, search engine metrics, and marketing trends for what will probably generate sales.

The artist is usually paid a tiny percentage of the retail price of the work and often has little or no control over such critical elements as title, cover design, and other aspects of packaging. The publicists, agents, gallery owners, and publishers have traditionally snagged the lion’s share of the revenue while the artist struggles.

Eisler has called traditional legacy publishing “fundamentally flawed…that in many ways has become punitive both to writers and readers.”[6]

Fortunately, the transition to self-publishing has gone well for him. He praises his current publishing relationship with Thomas & Mercer, the publishing arm of Amazon, as “the best” he’s ever had. He says he enjoys freedom, artistic control, and a more satisfactory financial relationship with the publisher. His website, www.barryeisler.com,  also contains many resources designed to help writers at each step of the writing and publishing journey.

Eisler is in the process of completing a new manuscript, which will shortly be put into production for publication. It will be the next Livia Lone novel (another series he writes, involving human trafficking), in which Livia interacts with Dox, a character from one of his short stories. After that, he plans to write another John Rain prequel, set in Tokyo in 1992. He is effervescent about the future of his work. He says that when he finishes writing a novel he always has another in mind, but now there are more than one. This is welcome news for all from the thriller master himself.

JENNIFER DWIGHT is a San Francisco Bay Area author, veteran of the legal community, and reporter for the San Francisco Book Review. Her suspense novel, The Tolling of Mercedes Bell (She Writes Press 2016), has won 12 literary awards, including the gold medal in Suspense from the 2017 National Indie Excellence Awards. For more information about her work and upcoming appearances, visit www.authorjenniferdwight.com.