Through the Writer’s Eyes: Ariel Levy and “The Rules Do Not Apply” 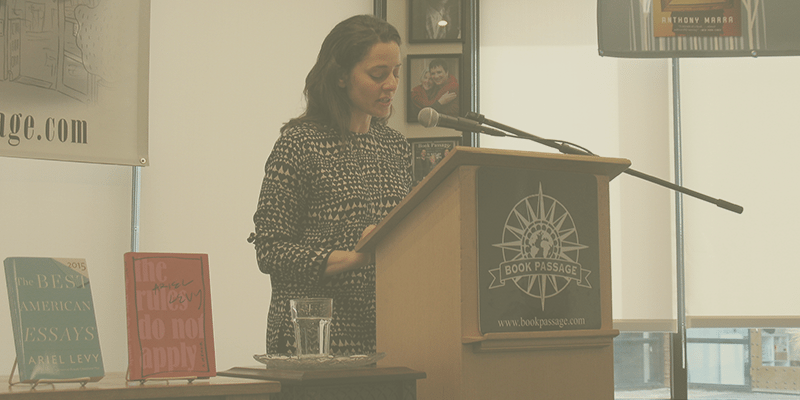 The San Francisco Bay Area’s iconic book store, Book Passage, was the setting for many a teary eye one recent afternoon when Ariel Levy’s audience shared their deep connections with her new memoir, The Rules Do Not Apply (Random House 2017). Ms. Levy is a 42-year-old journalist who has been a staff writer at The New Yorker magazine since 2008. Previously she was a contributing editor at New York magazine for twelve years. In addition, her writing has appeared in The Washington Post, Vogue, Slate, and The New York Times. She was named one of the “Forty Under 40” most influential individuals in the June/July 2009 issue of The Advocate, a prominent LGBT-interest bi-monthly magazine. Ms. Levy is the author of a previous book entitled, Female Chauvinist Pigs: Women and the Rise of Raunch Culture.

In addition to being a prominent journalist, Ms. Levy is also a dynamic and colorful speaker whom many in the Book Passage audience had heard interviewed on the radio earlier in the day. Some were so struck by Levy’s charismatic broadcast that they’d upended their plans for the day to attend the author’s book store appearance. 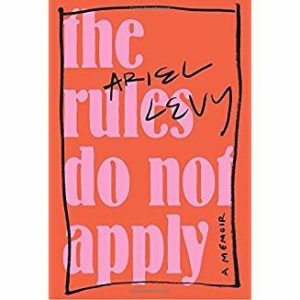 The Rules Do Not Apply arises from the tragedy, awakening, and recovery Ms. Levy had detailed in the essay, “Thanksgiving in Mongolia,” published in The New Yorker (Nov. 18, 2013), for which she won the prestigious National Magazine Award for Essays and Criticism. The essay now appears in the 2014 The Best American Essays anthology, and is archived on The New Yorker website. (Earlier essays of hers are anthologized in the 2008 edition of The Best American Essays.) The success of the essay led her to expand it into its present form, a “thoroughly modern memoir,” according to The New York Times, a book that is nearly impossible to put down once you begin to read it. For an interesting New York Times interview (March 25, 2017) by Penelope Green, see http://nyti.ms/2nu9feY.

The tragedy was the miscarriage of her baby boy at nineteen weeks’ gestation, while she was on assignment for The New Yorker. The context in which she found herself, so compelling to her audience, is the new terrain of her peer group: educated women in the early 21st century, who have been reared with empowerment to embrace autonomy and their careers, who now find themselves attempting to conceive children in the fourth decade of their lives.

“You can do it,” her mother’s hallmark encouragement, has been Levy’s, and many other lucky women’s, siren song. Yet Nature has the last word. Although a woman may be ready for motherhood, motherhood may no longer be waiting for her. Attempts to carry a baby to term amidst the waning of one’s fertility and the prevalence of miscarriage (up to 22%), even with all the advantages of modern medicine, are fraught with risk. There is no way to prepare oneself for the loss of a child or the ability to bear them, if motherhood is the objective.

Levy’s well-wrought memoir details her journey to readiness for motherhood. It sketches the development of her writing career, the joyous circumstances which result in marriage to the woman she loves, and her pregnancy at age 38. We admire her innate Yankee can-do spirit, bold personality, acerbic wit, and courageous approach to adventure and new experience. Yet, for Levy, the new experience of losing her heart’s greatest desire seems to supersede all of these strengths.

Amidst the palpable grief of those in the audience who had experienced the death of a child, Ms. Levy read from her book and discussed some of the many lessons to be garnered from these calamities. The assumption that one can “have everything,” if one strives for it with sufficient zeal, is a myth and an illusion, she learned. Moreover, it is “how a toddler thinks.” One cannot have everything. To survive overwhelming grief, there are no shortcuts: one must feel the searing pain and accept that one has been permanently altered. The previous rules no longer apply. One must face one’s lack of control over Nature’s circumstance and acquiesce.

However, when surrender becomes the path to survival, an internal power shift of the greatest magnitude– yet greatest subtlety– may occur in the darkest hours of grief, sorrow, and loss. Antithetical as it may seem to the “You can do it” mentality, surrender allows one to see and acknowledge that one is not the sole author of one’s destiny, Levy said. A great weight may be lifted and a new way of approaching the day and one’s future may show itself. Hope is there, under the stones of the ego. New love can emerge from this fertile soil. Life may lighten.

Ariel Levy’s wise and poignant memoir is the voice of a new generation of women, full of grit, pathos, truth, and inspiration. Being in her presence is energizing and ennobling. Reading her deep little book is inspiring.