Through the Writer’s Eyes: An Afternoon with Paulette Jiles 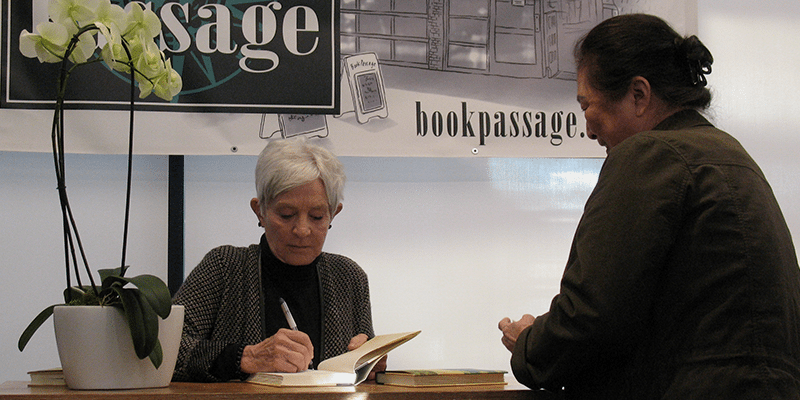 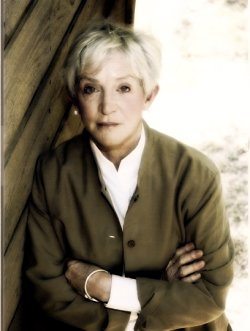 Paulette Jiles is a subtle woman with a penetrating gaze who chooses her words with obvious punctiliousness, as a great author must. She delivered them to an adoring audience at the preeminent Corte Madera, CA, book store, Book Passage, on a recent Sunday afternoon. She began by relating an ignominious moment with self-effacing humor, about how it was she arrived at an important awards banquet last fall with a busted arm and a bruised face (she had fallen down outside a book store earlier that day). As gentle and precise as she is, it was difficult to imagine her making that dastardly misstep. And so, we learned that Ms. Jiles’s new novel, News of the World (HarperCollins 2016), was named a Finalist in the 2016 National Book Awards, a well-deserved lifetime honor. Her speech at the ceremony and reading from the book are well worth viewing, here: http://www.nationalbook.org/nba2016finalist_f_jiles-news-of-the-world.html#.WJotzfKqREY

News of the World is Jiles’s 16th published book in a long and illustrious career. She is an internationally known New York Times bestselling author and the recipient of Canada’s prestigious 2002 Rogers Writers’ Trust Fiction Prize (for Enemy Women). She has also received Canada’s highest award for poetry, The Governor General’s Award. She is a memoirist, an author of dystopian fiction, and the creator of magnificent, precise historical fiction centered around Missouri, Texas and the Ozarks in the Civil War era and post-Civil War America.

News of the World is described by the National Book Foundation as “an adventure story, filled with danger and incident; a western, meticulously researched and rendered; and a two hundred-page prose poem with poetry’s usual virtues of compression, resonance, beauty, and power. Set in post-Civil War Texas, the chaos of that place and time are vividly depicted, even as the story remains primarily one of character. Paulette Jiles has shown how rich and deeply imagined the historical novel can be.”

The main character is Captain Jefferson Kyle Kidd, who accepts the task of returning a 10-year-old Caucasian child, who was kidnapped by the Kiowa at a very young age and who thinks of herself as Kiowa, to her Caucasian family. The two are an odd couple, who must travel more than 400 miles from Wichita Falls to San Antonio, only to find that the girl’s return is less than welcomed.

It all began with family history research, Jiles explained. Born in Salem, Missouri, in the Missouri Ozarks in 1943, she grew up in small towns in the state, and was graduated from the University of Missouri with a degree in Romance Languages. After a fascinating sojourn into northern Canada and the Canadian Artic among native peoples, Jiles married a Texan and moved to San Antonio, where they renovated a very old stone house.

During this time, Jiles decided to research the fate of her great great-grandfather, who had been a justice of the peace and teacher in Carter County, Missouri, before the Civil War. There were few records in the usual places owing to the widespread and wholesale destruction wrought by the War. Her curiosity was ignited when she and her cousin went to see a “lost” Civil War graveyard in an oak forest in 1996, graves covered with nameless stone slabs, stacked one upon another like Iron Age monuments.

She continued her research over many years—in the San Antonio Public Library, the Carter County Historical Society, county courthouses in Missouri, immersing herself in such official records of the War as she could find, and conversing with local historians. She was able to learn about the battles, the geography, the vicissitudes of human alliance during the War, the kidnapping and imprisonment of women, as well as the details of dress, daily life, landscape and architecture, and the utter deconstruction of society so magisterially brought to life in her fiction.

While most of her novels spring from her reservoir of historical research, Jiles has other irons in the fire as well. She is working on the second volume of a trilogy of dystopian fiction, a future world she inhabits when she is not writing about the past. Jiles was also requested by the Harvard Review to write a piece for their next issue (Fall 2017), their fiftieth, wherein she will join the august company of such writers as Arthur Miller, John Updike, Jhumpa Lahiri, J.M. Coetzee, Gore Vidal, David Foster Wallace, Joyce Carol Oates, and others who have previously written for this great literary journal.  Her article is “Angels and Demons in the Ozarks.”

While describing her writing process that afternoon in the book store, she explained that she does not plan out a project per se, or work from an outline. For her, “writing is a dream state.” Once she knows what and who her story will be about, after exhaustive research, she composes the whole first draft rather quickly. It may be very short. Then she returns ever so skillfully to tease out magical turns of phrase with her hallmark lack of sentimentality and density of substance, which result in the literary jewels with which she graces us. Paulette Jiles concluded that writing historical fiction has taught her to hone in on the details; the story is never as simple as it may first appear. 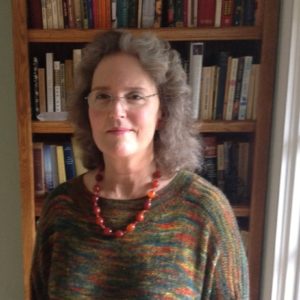