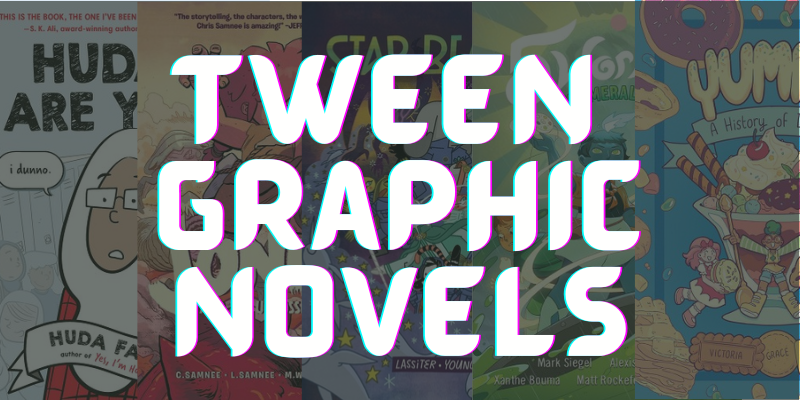 Graphic novels make for great reads for people of all ages, although the five titles featured in this roundup are particularly geared toward the tween audience. From a realistic story of a young girl trying to fit in, to thrill-packed fantasy and science fiction adventures, and on to an engaging account of the history of puddings, these five graphic novels have something to offer all young readers. 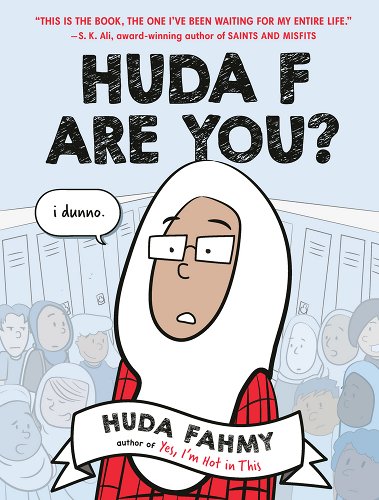 When Huda and her family move to Dearborn, Michigan, she finds life there surprisingly different from in her old town. The biggest change relates to the fact that Dearborn is a small town with a large Muslim population, which means that there’s no welcoming Muslim clique for Huda to neatly fit into. Having become used to being defined by her Muslim identity, Huda is discombobulated to discover that she’s going to have to find a more precise niche for herself if she’s going to join a friendship group. Having determined that she’s neither sporty, fashionable, nor a gamer, she decides to try out a whole host of identities and personas and see which suits her best. But what will she do if none of them seem right? Huda Fahmy’s Huda F Are You? is a highly amusing and very insightful coming-of-age tale about a young Muslim girl struggling to find her place in the world. 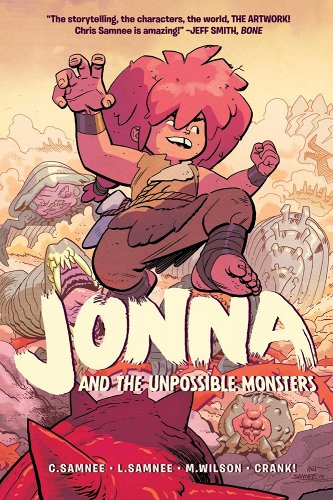 Rainbow has been on a year-long quest to find her missing father and somewhat feral adopted sister Jonna ever since they disappeared following the sudden arrival of mysterious monsters and the collapse of the world’s water cycle. She travels from settlement to settlement following rumors and seeking news of her lost loved ones, dodging monsters and helping survivors as she does so. Things start to look up for Rainbow, however, when she hears that Jonna has been spotted out in the wilderness, disheveled and wild but otherwise seemingly okay. But when Rainbow finally tracks her sister down, she discovers that there is at least one major change in her: Jonna now has sufficient super-strength to knock out a monster with a single punch. Jonna and the Unpossible Monsters Vol. 1 by Chris Samnee and Laura Samnee is an action-packed and vividly illustrated adventure story that follows the two sisters as they explore the strange new world in which they find themselves. 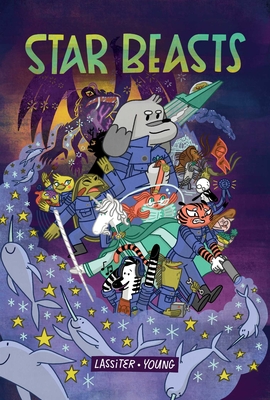 Loyal pup Bandit was living a pleasantly lazy ordinary life on Earth with his family when he was called up to join the Star Beasts, a top-secret group of creatures dedicated to protecting the planet and being a force for good in the wider universe. While Bandit is excited by his new mission, he has trouble fitting in with the other Star Beasts and also misses his home. However, when Khaos Krill, the evil emperor of Pluto, attempts to build a Novataur, a mythical monster said to be capable of destroying planets, Bandit has to work with a band of other Star Beasts to track down deadly galactic fossils and thwart Krill’s plan. Accompanied by a warrior turtle, a goldfish historian, a healing tiger, a techie iguana, and other brave beasts, Bandit sets out on a dangerous race across space to find the fossils and restore peace to the galaxy. Zany and full of fun-packed adventure, Stephanie Young and Allyson Lassiter’s Star Beasts explains the surprising real reason Pluto isn’t a planet anymore. 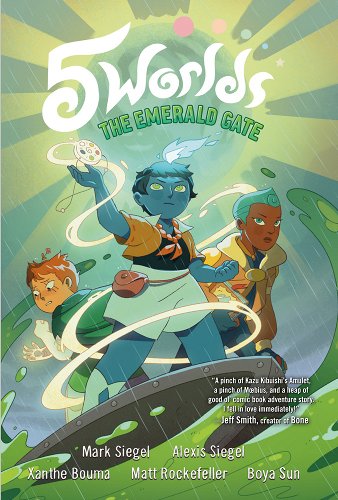 5 Worlds Book 5: The Emerald Gate by Mark Siegel and Alexis Siegel marks the thrilling conclusion to an epic science fiction/fantasy adventure story that spans planets and features both brave heroes and dastardly villains. In advance of the forthcoming final battle, Oona, Jax, and An Tzu travel to the perilous world of Grimbo (E), where Oona must light the last beacon and so save the 5 Worlds, if only she knew for sure where the beacon is located. Fortunately, an encounter with an old friend of Jax provides a clue that points the trio toward the beacon and launches them on a dangerous quest across the watery planet in search of it. For his part, the nefarious Stan Moon has hatched another plot to destroy the 5 Worlds through his growing evil powers and increasing connection to An Tzu. Oona and her friends are going to have to risk everything to finally put an end to Stan Moon’s evil machinations. 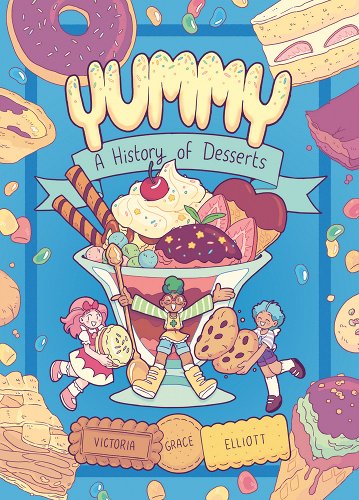 In Yummy: A History of Desserts, Victoria Grace Elliott presents an enthralling and highly appetizing account of the surprising history of delicious, sugary desserts. Through a host of facts, stories, and recipes, she takes readers on a whistle-stop tour of all things delectable, accompanied by the charming and often hilarious food sprite Peri. Between the pair of them, they investigate the major puzzles that have intrigued dessert lovers for years. For instance, they reveal how a mistake led to the invention of the brownie and how an unlikely team-up led to the development of ice cream cones. They also explore how cream first came to be frozen and who first decided that it might be a good idea to encase fruit in pastry. And after they set out the true stories of some of the world’s favorite treats, they provide recipes so that readers can try the delicacies for themselves. It all makes for a globe-trotting culinary adventure that is near impossible to put down.