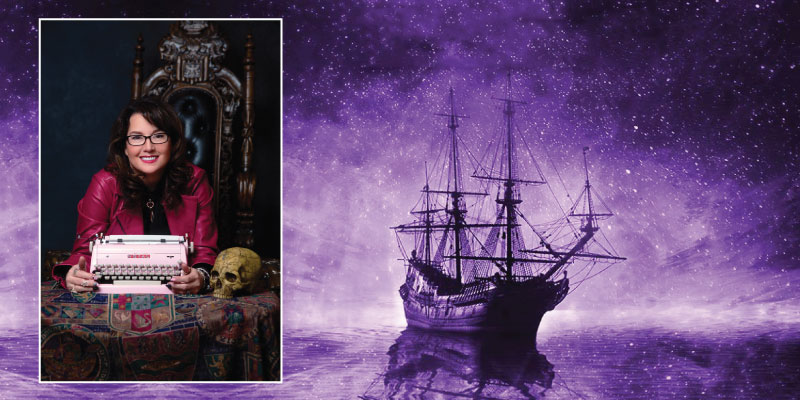 Melissa Lockaby: It’s obvious that writing energizes you. How do you keep track of all the characters and their specific nuances from book to book?

Sherrilyn Kenyon: I think a lot of it comes from the fact that I don’t think of them like characters or books. To me, they’re very real, like people I know. And because I come from a big family, it’s like keeping up with who is allergic to nuts or who is lactose intolerance, who skinned their knee on their fifth birthday, or who got into trouble for cutting class in tenth grade. When you think of all the information you carry about all the people you know, you realize that it’s the same thing I do with my book people. No difference really. And to me, the books are just one long overarching story like a lifetime for the characters, so again, I see them like watching my family grow. Because they live with me all the time, it’s easy to keep up with them. I don’t have to follow them on a wall or call them to check in. I just close my eyes and see what they’re up to.

I’ve read that you wish you could write faster to be able to capture all your ideas. How many unpublished or half-finished books do you have waiting in the wings?

Enough to keep my kids happy in the event of my untimely death—especially because two of them are writers. I have a lot of notes and even entire series I have yet to start. I hope one day at least one of them might be interested in picking up the baton and breathing life into some of those people who are waiting in the wings. The partially completed novels, and even finished ones, taunt me constantly. Sadly, there’s just not enough time in the day.

Pen, typewriter or computer?  What do you use when you are writing?

All of the above. It just depends on my mood, although my pen is electronic, so it feeds into my PC while I’m writing with it.

Readers always have high expectations of their favorite writers, especially after a particularly good/successful book.  How do you balance those expectations but still stay true to yourself as a writer?

Luckily, I’ve been doing this for decades, and I’m a stubborn Southern writer reared in a large family of well-meaning, bossy boys; in short, it means we’re born listening to the characters in our head and not listening to the voices outside us, trying to boss us around. So, while I love and adore my readers and deeply care and want to please them, just as I do my family, I know that at the end of the day I have to live with myself and the people inside me. My first priority is to bring the people to life and to be as true to them and to their stories as I can and to only hear them — to let no one else tell me who they are or who they’re trying to be (just as I can’t let anyone else tell me who I am or who I want to be). We all have to be true to ourselves and our destinies. If I fail to let the characters tell the story, then it won’t ring true and it will show on the page. That wouldn’t be fair to anyone, and that’s what I always keep in mind.

What character would you like to be out of your books?

None. I like being me. If I was one of them, I couldn’t be the mother of my boys and they need me. But if I had to choose, probably Simi. She’s spoiled rotten and gets away with murder (literally). She also gets to hang out with Acheron and Styxx and can charge like a demon and not worry about paying the bills. That latter part is definitely a dream I think most of us have. Or I’d be Mack, a space pirate queen who lives by no one’s rules, except her own.

All of the above. They each have a place and are a necessary part of my world.

If you weren’t a writer, what would you do?

Well because I’ve always been a writer, I can’t imagine any other life, but I have had a number of other jobs while writing that usually include some form of teaching.

My love of reading comes from my parents reading to me at bedtime.  Where does your love of writing come from?

I come from a long history of writers, so I think it’s safe to say it’s in my blood. I’m a direct descendant from Edmund Spenser and Shakespeare, along with being related to a number of political, social, and journalistic writers. Even Thomas Paine and Cotton Mather were cousins.

Have you ever woken up in the middle of the night from a dream (or nightmare) and written it down to eventually use it as the basis of a story?

As long as I’m writing, I don’t really dream. But then I don’t sleep much, either. I rarely get more than four hours of sleep a night. I’m one of those rare people who really doesn’t need much shut-eye. But, as a child, I did have one in third grade that became the basis of the prototype novel that ultimately became Born of Shadows. I remember it because I wrote it down in my brother’s notebook that he needed for school and he wasn’t really happy that I absconded with it.

It seems the thing to do right now is to partner with other authors to write a book. Have you thought about doing this? If so, who would you like to work with?

I never follow trends. You have to remember that I’m a former punk rocker who played in a punk band. So, I always dance to my own tune. But that being said, I have been doing this for three decades, and, during that time, I’ve worked with a number of other writers for a lot of reasons. I teamed up with several for the Marvel comics and manga projects years ago; which were a lot of fun to do. Years ago, I wrote some of the Bad Agency and Beladors with Dianna Love. Alethea Kontis and I have put our heads together for Simi’s ABCs. Kevin Anderson and I have worked together on several projects. And my son and I are working on a project together. 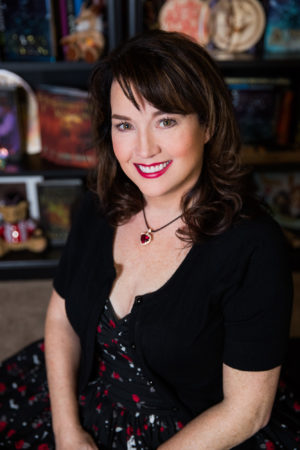 Defying all odds is what #1 New York Times and international bestselling author Sherrilyn Kenyon does best. Rising from extreme poverty as a child that culminated in being a homeless mother with an infant, she has become one of the most popular and influential authors in the world (in both adult and young adult fiction), with dedicated legions of fans known as Menyons–thousands of whom proudly sport tattoos from her numerous genre-defying series.

Since her first book debuted in 1993 while she was still in college, she has placed more than 80 novels on the New York Times list in all formats and genres, including manga and graphic novels, and has more than 70 million books in print worldwide. Her current series include Dark-Hunters®, Chronicles of Nick®, Deadman’s Cross™, Black Hat Society™, Nevermore™, Silent Swans™, Lords of Avalon® and The League®.

Over the years, her Lords of Avalon® novels have been adapted by Marvel, and her Dark-Hunters® and Chronicles of Nick® are New York Times bestselling manga and comics, and are #1 bestselling adult coloring books. Keep your eyes peeled, her books are soon to be hitting both the big and little screens by the same group that specializes in turning beloved literary series into major movie franchises.

Join her and her Menyons online at QueenofAllShadows.com