Interview with Robert Wang, Author of The Opium Lord’s Daughter 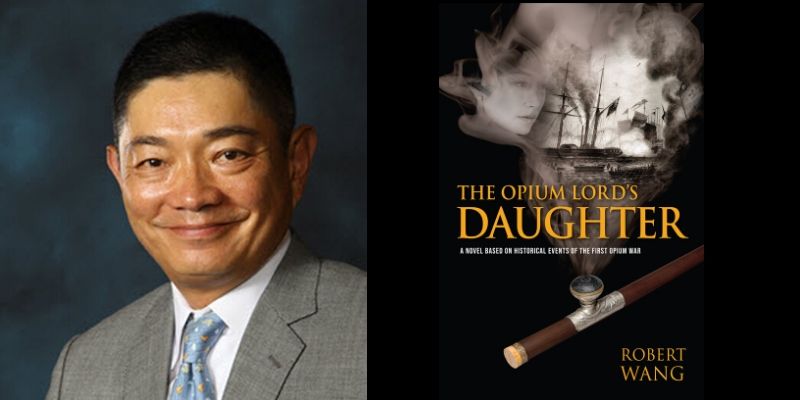 Born in Japan and raised in Hong Kong before moving to the United States, Chinese American businessman Robert Wang has a firsthand perspective of both Chinese and Western cultures and their entwined history. He first learned as a school-boy how the Opium Wars formed the basis for modern Chinese politics and history, Wang had been fascinated by this period. The war became the catalyst determining how modern China has been shaped—and hindered—by Western colonization.

After settling in the United States and becoming a successful entrepreneur and a pioneer in the aerospace industry, Wang remained an ardent Sinophile, engrossed in the lessons and impact of the Opium Wars and its
aftermath. This passion only grew as Wang noted the modern parallels—particularly the current opioid crisis—that echo similar events and actions from this earlier period.

He spent years researching the history, facts, and fictions of the Opium War, talking to numerous experts on the subject, both in the U.S. as well as on Mainland China. In 2018 he embarked on an intensive research trip to Guangzhou (Canton), the nexus of the opium trade and the ensuing conflict, and was granted rare private tours of its museums, led by some of China’s preeminent scholars on the topic.

What he saw and learned provided an exceptional win-
dow into many of the elements that eventually found its way into The Opium Lord’s Daughter, a historical novel
told from both perspectives—Chinese and Western—about this dramatic and history-altering conflict.

Why did you choose to emphasize the perspective of Su-Mei?
From the very beginning when I conceived of the plotline, I wanted to use a female character who is strong, independent, brave, and compassionate.  In my household, I have my wife and three daughters, each are tremendously accomplished in their respective fields (law, finance, acting), so I am a big promotor of boosting the female persona when I wrote this story.

Why did you make it a point to leave Su-Mei’s feet unbound?
It was the only way I can work the plot as I needed to have Su-Mei blend into the crowd when she is out and about while being a fugitive.  Her bound feet would have done her in.  I also wanted to have readers get details of this barbaric and stupid fetish that Chinese men had over centuries to put women down and treat them as objects…

Was it divine intervention or coincidence when Father Afonso was killed?
I leave that up to the reader to decide…

Why did you have Su-Mei’s grandfather commit suicide?It was the honorable thing to do in Chinese culture; this way, he avoided the shame of a public execution.  FACE is a very important component of Chinese culture, even today…especially since China is a super power now, and “giving Face” to those who’s accomplishments is an important aspect to a proud culture.  Su-Mei’s grandfather had been a highly respected and accomplished “guan” and being executed in public would be the ultimate “loss of Face”.

Was Da Ping’s downfall a product of his own decisions or those of his father?
Da Ping is a victim of the times…his family’s business as the biggest opium dealer in Canton, and probably all of China, sort of sealed his fate.  I victimized him also to portray what powerful consequences opium can cause, even to a thirteen-year-old.

Did Su-Mei return for Pai Chu out of obligation or love?
Love as a sister and obligation culturally.  It also shows Su-Mei as someone who is honorable and compassionate. She knew Pai Chu would refuse to go to England but felt obligated to tell her that she was going and hoping Pai Chu would change her mind.

Why does Su-Mei give away her baby?
It is the only viable ending to this story – tragically practical.  It also adds to the necessary sad ending to the story. My guess is that readers would be rooting for a happy ending, seeing Su-Mei and Higgins go to England and living happily ever after. What opium did to China is nothing but tragic so making Su-Mei give up the only remnant of her love with Higgins was the only solution.

Was Higgins foolish or naïve to believe his family would accept and welcome Su-Mei?
I created Higgins as an inquisitive, naïve, moral, sensitive, adventurous, romantic, and competent (navigator) character.  Yes, he was naïve to believe his family would accept his Chinese wife because he was an eternal optimist who would do everything in his power to have his family accept his wife.  He embodies a very Western concept that change is NOT a threat, while the Chinese culture is very strict and not in favor of change, especially back in the days of Imperial China.

Who is your favorite character in The Opium Lord’s Daughter?
I love all my characters…!!!  Each character played an important role and they all worked together to convey my thoughts, opinions, observations, and importantly…convey to readers as much about the cultural backdrop in which these characters lived. I also mixed in some contemporary themes such as climate change (typhoon in March), LGBTQ issues, Catholic priest child abuse, and racial discrimination that has gone on since the beginning of civilization.

Is there a sequel in the works? Will you be publishing more on this time frame and topic?
Yes…