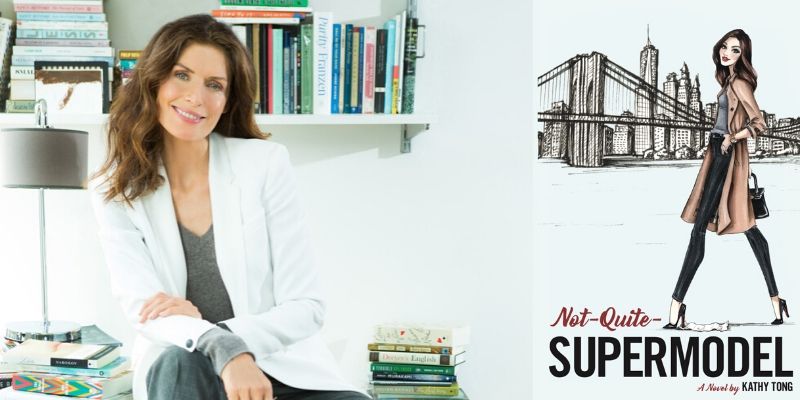 Kathy was discovered at age the ripe old age of 20 behind the seafood counter at Canada Safeway. That’s right, she was slicing fish. And, studying at Simon Fraser University — but she walked away from all that to take a stab at a modeling career. By all shapes and standards, she was way too old to start modeling, and, at 5’8, kind of short. However, one Marie Claire cover and 28 years later (much older and no taller), she is still doing it, with some big campaigns under her belt…some of which you might even have noticed. Her high-profile client list includes De Beers, Tommy Bahama, Barneys, Oil of Olay, Schwarzkopf, Max Factor, and Clairol. As the face on the latter’s hair color box, you may have found her smiling back at you from the shelves of your local beauty department. Or, if you play video games, you’ll find her pointing her gun at you as the face of Mona Sax in Max Payne 2, which earned her worldwide acclaim and lots of fan art. Does anyone want a Mona Sax hand puppet?

She was the spokesmodel for Neutrogena in North America and faked French and German well enough to land the gig across the pond in France and Germany. She played Kathryn Fitzgerald on ABC’s One Life to Live and boasts several blink-and-you’ll-miss-it roles in blockbuster films.

Kathy just finished up her juicy first novel. How semi-autobiographical is it? She’ll never tell.

Of her career, she says this: “It isn’t exactly playing out in the Hollywood fashion I had envisioned but the Lifetime made-for-TV version is still promising.”

She has no plans to go back to slicing fish…yet.

I have to know how much of this book is real! Did you really do a crazy dance on the runway and have it go viral on YouTube?
It’s definitely inspired by real-life events but it’s mostly fictional. When I started modeling in 1990 there was no social media and may I just say, and I cannot stress this enough, thank f**k for that! As per the runway debacle in the novel, there was indeed a show that involved skipping, waving and blowing kisses. The designer didn’t look pleased when it was over. Unlike the book, there was not a ton of media and I have never seen any video. I didn’t need to nor will I ever need to, but someone certainly captured that iconic performance. My agency never sent me on any other show casting, and the incident in question was the first and last runway show of my modeling career.

Where did you get the inspiration for Alex’s name?
Not to say that my mum and dad made the wrong choice, but if I could have chosen my own name, I would have picked Alex. There was also something fun about the whole, Alex in Wonderland, theme that worked with that name. Emmerson just happened organically as I was writing character sketches. I never considered any other surname, Emmerson felt authentic not only to Alex but also her family.

How did you decide how much realness you would put into the book versus the fictional aspects?
A huge part of me breathed life into this story but it was important to keep a safe distance between my life and Alex’s. There’s a lightness to her journey that does not mirror my own and I loved living the more joyful aspects of modeling vicariously through her. It was imperative that the story was authentic and relevant to the industry now, which is vastly different from the business in the nineties. I interviewed a lot of younger models to get a sense of what it’s like to be a starting out as a model in the era of Instagram, which was completely foreign to me. The aspects of the book relating to modeling itself are very real. The angst, the longing, the rejection, the body image issues, the day to day challenges of navigating the city, the endless exhausting castings, and also the excitement and sense of victory when you finally book your first job. Those raw emotions resonated with all the awesome girls who shared their stories with me. My personal experiences with those challenges and successes jump off the page. I was incredibly fortunate to have crossed paths with truly fascinating, exceptional people. Collectively, they inspired the unique characteristics of Alex’s crew but the characters are mostly fictional. I wanted all the characters to come to life on the page in a way that was new to me. It was an absolute blast to create Alex’s world and the whole story is a love letter to that era in my life. That said, there are certain events that are 100 percent real.

What was the real Linus called (if he was real)?
Linus is very real, and he is called Linus. I still have him and not unlike Alex, it doesn’t embarrass me in any way and everyone who knows me also knows Linus.

Was writing about your life easier to do when it was in a fictional format?
Definitely, there’s a freedom to pour levity into some of the darker moments and rewrite endings that are authentic to what you wished was the reality. Also, a fictional narrative protects the innocent and the guilty. Lydia Baker, you know who you are.

How mean are the girls in the modeling industry?
That depends, it was my experience that girls who have been around for a while and experienced a certain degree of success aren’t mean. My contemporaries are incredible, confident women who love each other up, but I’m taking late thirties, early forties, and flirting with fifty. However, back in the day, I worked with some god-awful models who were straight out of central casting ‘mean girls’. Their massive egos and sense of self-importance were insufferable but it was no worse than high-school. I had much worse experiences with art directors, and photographers who tortured me on set for days. At this stage, in the twilight of my career, I would walk off a job if anyone ever spoke to me the way they did.

Do you or someone you know have “plumbaphobia?”
It’s not a real word but I can assure you that it’s a real thing. Admittedly, my experience with that was far more intense than most people I know who have issues with untoward bathroom environments.

From start to finish, were there any big changes you made to the book and if so, what were they?
Great question and there definitely were big changes. Initially, the story was set in the early nineties but a majority of beta readers felt young readers would feel more connected to the story if it was set in a more current climate. That required a lot of research and rewrites. Also, people loved Lori and Keisha who had much smaller parts in the first drafts. Everyone wanted more of Keisha which was a huge challenge because I’m not African-American and I wanted to get that right. In my initial rewrites, I got it hopelessly wrong and every beta reader’s feedback was that Keisha was not representative of them in any way and they felt it was clear that the writer wasn’t African-American. I reached out to professionals in the black community to help me rework Keisha, and most of her dialogue was completely rewritten by someone else. She’s one of my favorite characters.

How easy was it to write this book? Did you ever get writer’s block during the process?
It wasn’t easy and it was all-consuming. There were days the words poured onto the page and weeks where it was liking drawing blood from a stone. Writer’s block is a source of psychological torture, like full-on Jack Nicholson in ‘The Shining’, but I screamed and cried my way through it and there was certainly wine involved. For the most part, I loved it and the day I received the first galley I knew that I would write another novel.