Interview With Julian Starks, Author and Photographer of Life Behind Bars Vol. I 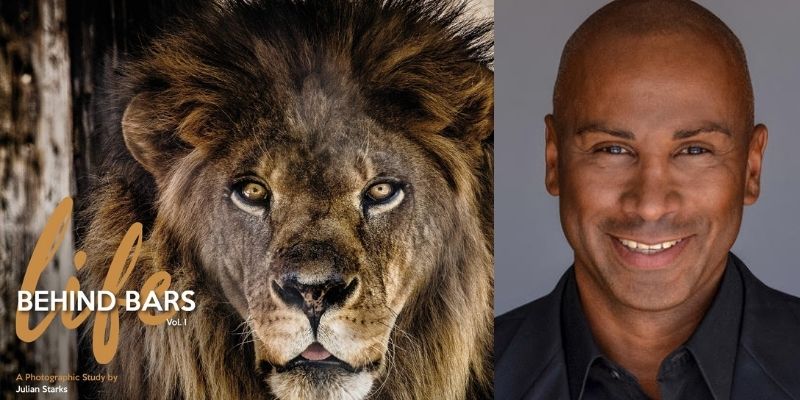 What is your principal camera or system? Why? I am an Avid Nikon Man! I used a Nikon D5. D850 and a Leica V-Lux. I went into a camera store and asked the clerk what was the best affordable camera at the time to go to the Sundance Film Festival to take a bunch of photos? He brought me a Canon and a Nikon D300.

I tried both and immediately fell in love with the smooth and quiet Nikon. Love at first use!

Some of your photos are shockingly close—like the two-page wolf face with an astonishing golden gaze. Some detail on how you accomplished that? I’m thrilled you love the two-paged Wolf face, especially since it’s a Full Grown African Male Lion!!!!!!

I love it! That photo has so many people guessing different animals. Mostly Wolf. It is part of a four-part “Lion Series of Photos”. I just happened to choose that 1 out of the 4 to the book designer and she loved it. The photo was taken at the California Wolf Center in Julian, California. They have two wolf packs; American and Mexican Grey Wolves. I used my Nikon D5 and the 600mm Nikor Nikon lens.

How many of your subjects were obviously aware of and interacting with you? The wolves, gorillas, chimpanzees, are so close to us as to be obvious. Others? Most animals I photograph, react to me, because I make similar noises they recognize.

The most fascinating and funniest moment came at the San Diego Safari Park. I was photographing this female Gorilla. I use a flash even during the day to get a pop in the pupils of the animals. So, as I’m clicking away at the Gorilla and flashing my light in her face, everyone behind me starts to laugh hysterically. I stopped and asked this sweet little lady why she was laughing, and she said the Gorilla I was photographing “Flipped me off”!
I said “No way” and looked back at the series of photos I took, and low and behold, you can see the flash popping in her face, and I guess she had enough of that and decided to respond in her own sweet way. Flipped me off! So, you can see this awesome photo on page 81 of Life Behind Bars.

Commentary seems a bit thin. Was this a function of interacting with PETA? Not criticizing, but lack of detail is obvious to a long-time fan of Goodall, Lorenz, Tinbergen…other animal Behaviorists/Ethologists. Have you read in the field? No, not yet. This first book was to be from my point of view of what it meant to me about Caged Wild Animals.

As a Documentary Filmmaker, I learned as I interacted with the Animals and the staff. Creating the Book with my staff is where we all learned about the statistics of the Animals, their habitats, behaviors, their enemies; Man & Climate. When I decided to embark on this Journey, it was from my love for Lions and growing up watching Mutual of Omaha presents…, Jacques Cousteau etc…

I had always wanted to visit SHAMBALA, Tippi Hedren’s Preserve in Acton, California. As soon as I walked in, there was a Giant Male Lion in this enclosure. It kept staring at me as I took countless Photos. It was “Henson”, Tippi’s favorite and main Lion. He is on the Cover of Life Behind Bars. I spent three hours there and as the group and I were leaving, out came Tippi to greet us. For about an hour, she talked to us about why she started this Preserve in 1973 and that ”It was a necessary evil” but, because of climate, poaching and Game hunting she had to protect these beautiful Animals.

Initially, I wanted to do a book that was definitely against caged wild Animals. I hated it when my Mother would take us every weekend to the Cincinnati Zoo when we were small. I asked her why the Lion there kept pacing back and forth in his cage. She said it was “Stir Crazy, which at that age, I had no idea what that meant, but I knew it wasn’t good. After hearing Tippi’s point-of-view, I decided to take the whole year off and travel America to 12 other Zoos, Preserves, and Sanctuaries to see why they were started. I knew after my year’s travel and talking extensively to staff, that it is a “Necessary Evil” to have Wild Animals captive, but unfortunately, to preserve these fragile animals there had to be a place to protect them. I also discovered that the Zoos of old are not the Zoos of today. All of the places I visited, especially the Cincinnati Zoo, were in fact giant open enclosures compared to the old days. They emulated their wild habitat as close as possible.

Finally, PETA had no say in the production of the book. They noted that their objective was different from mine, but they respected my effort to enlighten the public to this predicament and loved that I in the end wanted what they wanted; “To Save Wild Animals”.

Have you considered taking some comparison photos using wild, in-nature animals and their captive relatives for another volume? Or collaborating with another photographer? For example, Jim Coda?

You are very perspective! My second book is doing just that. It is going to compare Captive Wild Animals to their counterparts in Africa. I have a 14-day Safari booked for July 2021, in Kenya and Tanzania. Two of those days I have booked a private tour, to take up my Drone to get Aerial photos.

What kind of time did you have to spend to get your fine lighting effects with the creatures you have depicted or to capture movement/gazing?

There is no time for the correct lighting setup. These animals are unpredictable and I had to have all three of my cameras set to whatever available light there was with my flash ready to go. The Nikon cameras I have are so advanced, there is little room to mess up a shot if you have the basics set.

Believe it or not, my technique comes from many years of Modeling, Acting, dancing, and documentary filmmaking. I don’t plan anything. I take in the scene, make a noise to activate whatever animal is in front of me and let their actions dictate mine. If you look at all of the photos in the book, a lot of them look as if I had animals pose for me. It’s a lot like photographing children, you really can’t pose them, they do whatever they want and I just watch and catch it. Kids are the best to take photos of, because they are so unpredictable, just like Animals.

Would you consider some commentary with photos in your next volume detailing what it took you to accomplish shots? Equipment, timing, necessary waiting, and so on? An obvious master might well share details regarding such accomplishments.

Yes, definitely! My Project Manager wanted to put a lot more in, but I told her that I didn’t want this to be a book that ended up in a school library with a lot of technical info that bored people.

The most important thing to me is: “I want the photos to tell the story of their life, with the appropriate commentary and description to complement the visual story. I’ve seen many technically awesome photos where the subject in the photo is “HORRIBLY DEAD” no life at all!

Take a look throughout Life Behind Bars and look at all of the PRIMATES. All of them are looking into the camera and you can see their story in their EYES. It really is amazing! Perfect light or not, that is my objective. “Tell me who you are”. Human and/or Animal.

Are you able to do this work full time?

The past four years, yes, but I am still an Actor, Filmmaker, Entrepreneur. I have four projects in four different genres operating presently. So, I am very busy!

What interference have you experienced in institutions from general tourists/spectators?

I set up VISIONS OF THE WORLD Inc. a Non-Profit 501(c) (3) Charity to give a portion of all profits from the book and ancillary products for the life of this project back to the Institutions where I photographed the Animals. Most of those places were not interested in being involved at all with this book.

The public however, was always thrilled and wanted to know all about my book and where to contact me for the finished product.

In general, how happy are you with your publisher, collaborators, editors? And what changes do you want to make ‘next time out of the gate’?

Dorrance Publishing has been awesome. They have helped me with the whole process of getting this book from start to now releasing this book to the World. Very Impressed.
This was my first venture in which I employed 8 employees and many outside resources to form Visions of the World Inc.and its first project; Life Behind Bars. One Hell of a ride with many ups and downs!

Thank you for this great line of Questions and please check out these New Book Reviews.

Life Behind Bars Vol. I 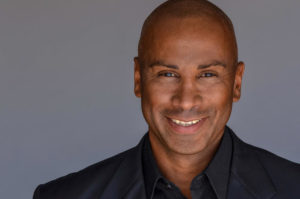 Julian Starks has been a force in the world of the Arts for most of his adult life. Julian began his career in New York City as an established working actor, having studied under acting teacher legends, Sanford Meisner and Bobby Lewis, as well as Martin Barter at the famous Neighborhood Playhouse Theater in many mediums including theater, independent film, national television shows, and commercials. He studied at The School of Visual Arts in New York City and eventually decided to move to Los Angeles to further his education at the UCLA School of Film and the Los Angeles Film School to further his opportunities in filmmaking and television. He is negotiating the release of his first independent feature-length documentary, “JOURNEY TO SUNDANCE”.

JOURNEY TO SUNDANCE’ is about the spirit, dreams, and struggles of independent filmmakers from all over the world, as well as his own 13-year battle to finish this film.

He later graduated from the BROOKS INSTITUTE OF PHOTOGRAPHY in Los Angeles to continued his passion for storytelling in a new medium… It is this medium that best offers us the pleasure of sharing Julian’s love of animals as he presents, LIFE BEHIND BARS VOL. I, his first Fine Art Photography Book.

Julian has spent much of the last several years traveling the world photographing wild animals. At various sanctuaries he was educated about the many dangers animals experience in surviving in the wild, often dying or suffering due to the actions of humans. Julian was moved to create ‘VISIONS OF THE WORLD Inc.’ to make a difference for these animals by announcing their plight and by donating proceeds to sanctuaries and to animal rights causes.