Interview with Dan Grant, Author of Thirteen Across 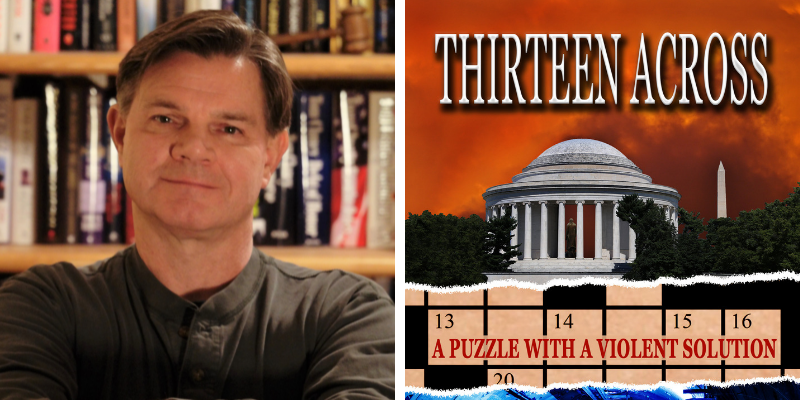 Check out Kristi’s review of the book here!

KE: When you write a book, do you sit down and write an outline out or have a bunch of sticky notes with all of your ideas on them and put them together like a puzzle?

DG: My writing process is a hybrid style. I outline most of the story, building visual scenes at the beginning and then for the end. I almost always know where the story is going and how it ends. My notes and research can be extensive, and I have to figure out what to use and what tidbits to file away for another day. As I craft the story, I free-write between plot points while being mindful of the classic hero’s journey storytelling structure. I enjoy the spontaneity of free-writing too, and it’s sometimes surprising where the story goes. An example in Thirteen Across was a scene with Will Shortz (puzzle master extraordinaire): I wanted to get Will out of the FBI command center and into the field, so I had him run an errand to retrieve a clue. Nothing bad can happen doing that, right? Without giving too much away, I had him enter the house and, just as he retrieves the clue, something unexpected happens. Will’s mini-theme is a “day of firsts” (small moments and events that don’t regularly happen to him as an editor for The New York Times). 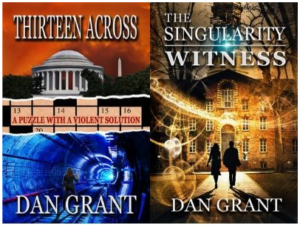 In terms of the crossword puzzle, it functions not just as a plot device but also as a way to tell the backstory of the villain (Phillip Barnes), infuse interactions with FBI Special Agent Kate Morgan, and expose covert research that foreshadows a concerning future. Some puzzle answers have double meanings too. The puzzle was a challenge because it had to interconnect with the characters, backstory, and destinations, and seem like a regular crossword puzzle. Because so many people work crosswords (and are far better at it than I am), I had to reveal only essential clues and hide the rest of the puzzle to keep people (including Will Shortz) from guessing ahead.

KE: I’ve noticed that your books, especially the locations are written about with a lot of detail. Have you been to most of the places in your books?

DG: In many ways, a unique location can almost function like a character. I love learning about places and people, and when possible I visit each location and walk the footsteps of the characters. I want to see and feel their environment, and it helps enhance the reading experience. I visit lots of places that don’t fit the story. In Thirteen Across, I read about a quaint Italian restaurant called Al Tiramisu not far from a story spot and was compelled to write a brief scene there. When I visited, Chef Luigi and his staff were wonderful hosts and the food was everything the food guides said—and I even learned about more behind-the-scene secrets of DC.

KE: How do you choose the names for your characters (not including Shortz, of course)?

DG: For The Singularity Witness, I used small phone books kept from places where I had once lived. In Thirteen Across, many names came from a DC veteran’s cemetery that I visited. Several female names came from women who’d fought in the Civil War (a story by itself). FBI CIRG Section Chief Dix Martinez was named after a fallen female agent from the FBI’s Washington Field Office.

KE: Which one of your characters do you relate to the most? And why?

DG: Thomas Parker in The Singularity Witness is the closest, but in the collective story series it’s Kate Morgan because she’s just figuring out that her life is caught up in events grander than herself. Thirteen Across needed a strong lead. Kate’s vulnerable yet strong when needed. She’s not a commando fighter and solves her problems using her wit, smarts, and instincts. She lives by a strong sense of ethics but can be a rebel at times and break a few rules.

As a villain who is stronger and smarter than anyone else in the story, Phillip Barnes was the most interesting character to get to know. He’s not the cookie-cutter stereotype crackpot. I tell people that once I had Kate and Barnes set, they wrote Thirteen Across, and I was along for the ride.

KE: Is there a character that you’ve created that you really dislike but who is necessary to the success of your book and its story? If so, who and why?

DG: I don’t have any characters that I dislike, even the villains who have their own world view and distorted mindsets. The villains are truly the heroes of their own stories. The Singularity Witness and Thirteen Across both have dark moments, slightly creepy moments, but as readers those snapshots add depth and can push us from our normal comfort zones.

KE: Does Jack make a comeback in “Transfer”?

DG: Great question. Without giving too much away, Jack Wright and Randy Wang needed to step aside so Kate could face her destiny. Just when Kate thought her love life was back in balance, it’s all twisted up in that she cares for both Thomas Parker and Jack. Jack won’t be in The Singularity Transfer (the story that I’m now writing), but he does have an unfulfilled mission to hunt down a female assassin named Debra Ford. Who knows, Jack might step into his own story.

KE: What are some of the different sources you focus on using to create realistic stories?

DG: My storytelling style is research-based thrillers. I love learning about people, places, science, medicine, and technology. I strive to make the context behind the story fun to read and allow readers to discover something they didn’t know.

When possible, I visit the story locations so I can walk in the footprints of the characters. I want the settings and the content to work like a canvas that the story (the characters, conflict, and tension) is painted against.

When possible, I reach out to people who are experts in the field. An example is, since Kate is a female FBI special agent, I asked the agents that I came across about duty assignments and cases. The FBI’s Office of Public Affairs answered specific questions about internal processes, programs, and organizational structures.

KE: Would you ever consider making your books into movies?

DG: I strive to create visual stories and settings with relatable character, and I think the characters in my stories will showcase well in TV or film.

KE: Why the number thirteen?

DG: The play on thirteen is based on human superstitions. Other than a few sports figures, rarely do people think positively about the number. So if evil is lurking about, that’s the number that would be on its jersey. In crafting a crossword puzzle, I needed 13 Across (as a theme) to be closely placed into the center of the graphic (as a centerpiece).

KE: Where did the idea of human parchment come from?

DG: This goes back to research that I came across. From the villain’s, Barnes’, point of view, this represents a payment that must be made. The symbolism connects to deeper secrets that he’s struggling to deal with, especially what he knows about his life and his former love. Along with being a temporary patch that covers up his own broken heart, it exposes the scars left by those he believes have wronged him, and it’s a scarlet letter that marks his enemy. 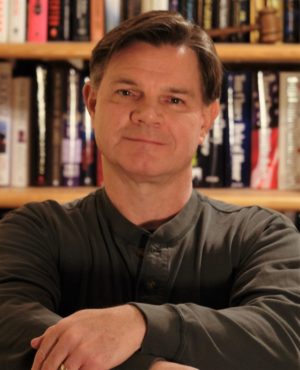 Dan is the well-received and Amazon bestselling author of The Singularity Witness and the recently released puzzle-style thriller Thirteen Across. He loves stories that weave science, medicine, technology, or history into the fabric of the tale. Both of his science/medical-style, research-based thrillers add unique locations to the mix as well. His goal is to entertain readers and write intelligent, vivid, and fast-paced thrillers with a scientific edge.

He’s a licensed professional engineer with degrees from Northern Arizona University: a bachelor’s in electrical engineering and Master’s in College Education and English with an emphasis in creative writing. His engineering career has provided lots of fuel for potential stories and conspiracies.

Dan lives in Colorado and is working on his next thriller—The Singularity Transfer and a sequel to Thirteen Across.