Interview With Charles Salter, Author of The Flight of the Schimmerplotz 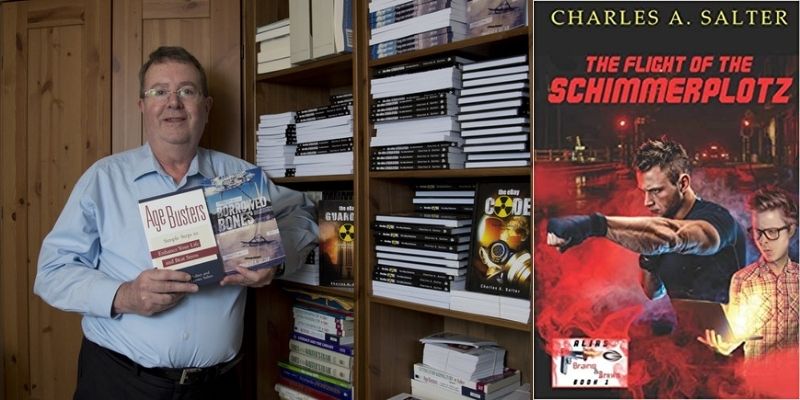 Where did the idea for Flight of the Schimmerplotz come from?

Like most of my writing ideas, the basic notion of this book came to me first in a dream. As the plot began to build in my mind beyond that, I relied also on real news events and considerable online research to get all my facts straight.

Did you have the characters already or develop them with the book?

A year before this book came out I published a short story anthology with my brother and co-author J. L. Salter. Included in that volume DEATH DO US PART was my story “The Herndon Secret” which introduced my three main characters also found in this novel. The publisher of the anthology was so taken by these characters that she encouraged me to develop an entire series around them, of which this current book is the first volume.

Did you always know it was going to be a series?

Yes, the publisher and I from the beginning planned for this to become a series. Of course, the amount of sales will impact any decisions about future volumes, but the end of Book 1 paves the way for a sequel in the next volume, as yet unwritten.

I was familiar with many of the contemporary settings for the book, having personally visited just about every location described. But once my characters started traveling in time to other periods, I had to do a lot of research to get my scientific facts straight and also the historical facts of the main location in the past where a lot of the action is set. The future places they go are, of course, entirely fictional and represent only my extrapolations of how certain things might turn out.

When did you know you wanted to be a writer?

I’ve been a writer pretty much all my life, probably in part because I grew up seeing my father write both fiction and non-fiction. Apart from writing required in school, I wrote my first children’s book when I myself was in third grade. It was so primitive and poorly illustrated, though, that I don’t think I ever shared that one with anyone and destroyed it years later as a teenager. By fourth grade, though, I was sharing things I wrote with my family. I and my brother often co-wrote little family plays and teleplays and short stories together even as young children.

Who are some of your influences?

Gosh, too many to mention all here. I guess the main influence on the anthology which included my short story introducing these characters in the first place was the 1960’s era of sci-fi TV, to include the original Rod Serling TWILIGHT ZONE and THRILLER series. In terms of action thriller writing way more recently, I suppose Tom Clancy and Michael Crichton would be my primary influences. I always liked how both could interweave solid science/technology, sci-fi extrapolation from known science, and real geopolitical events into an action-packed thriller with great characters.

What are some of your favorite books?

In this genre, I think my all-time favorite must be Crichton’s THE ANDROMEDA STRAIN. Anyone reading my current book will note at least some parallels with that one.

What are you reading right now?

I’ve been reading mostly non-fiction lately, books written by noted news analysts trying to make sense of the current world situation. In terms of fiction, I read everything my brother and sometime co-author J. L. Salter writes. We always read each other’s works early in the draft process and provide extensive critiques to improve the manuscripts. Then we like to read the finished projects later and see how much they got improved. Both J. L. and my daughter Carolyn–another published writer in the family–played a big role in enhancing my current book.

Do you have advice for new writers?

Never give up! Keep writing, revising, and improving. Seek out insightful readers or fellow writers who can critique your work and help you improve. Don’t let your feelings get hurt by honest criticism which points to how you can do better, but instead go and try to do better. As my creative writing teacher in college told the class, “the mastery of an art takes a life-time.”

I’m an exercise nut. I do the principal three types of exercise (stretching, aerobic, and non-aerobic) every single day. I love it! Whenever I reach an impasse in my writing and am not sure how to resolve a plot conflict or something, I’ll go for a nice long walk or jog to relax and generally the answer will pop right into my head! 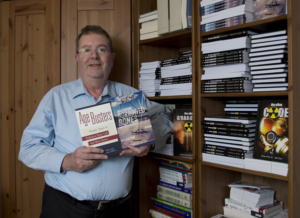 Charles A. Salter has been a writer all his life. A professional member of the American Society of Journalists and Authors, he has published about two dozen fiction and non-fiction books and hundreds of articles in scientific journals, popular magazines, and newspapers, as well as numerous U.S. Government Technical Reports. His adult mystery novels and juvenile non-fiction books have earned excellent reviews and won various awards. Currently retired, he served for 28 years as a Medical Service Corps officer in the United States Army. Following that, he spent many years as a civilian working at the military’s medical school, the Uniformed Services University of the Health Sciences. Living currently in Maryland as a full-time writer, he is married, has three children and six grandchildren.