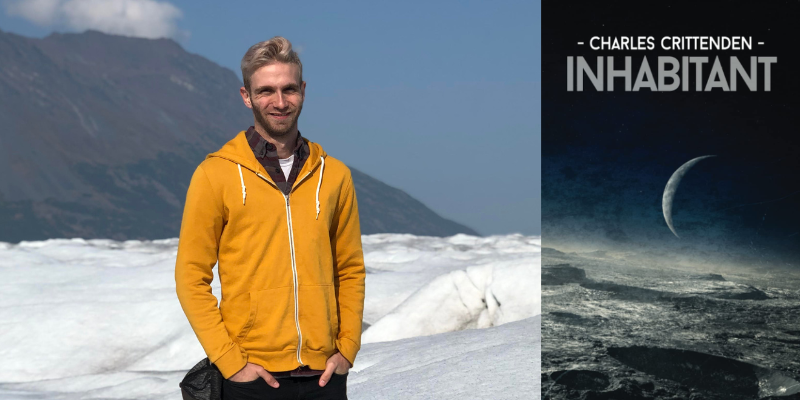 Where did the idea for Inhabitant come from?

The initial idea came about after a few major changes in my life really upended where I thought I was. I harnessed that feeling and just let the story spill out. The rest of the story snowballed after I built out the rules and order I was going to operate under. As I got into the groove I found a strong connection to the impacts we have had on Earth, both good and bad. I thought a lot about how insignificant we really should be in the grand scheme of things, but looking at the explosion of pollution, waste, etc. that exists as a result of us evolving and finding new ways to take advantage of the ground, it’s humbling how much has happened in our short time here. Such a small speck in the grand timeline of the planet has shown how big of an impact we are having as a species.

Why poetry?  Were you ever tempted to tell your story in a longer format, like a novel?

I’ve always been drawn to poetry as an art form. The ability to say so much with fewer words is a gift I fondly embrace. I started writing poetry in high school, but once I was introduced to some of the hidden gem authors by my professor at Webster University, David Clewell, I realized that poetry could be so much more than what we were shown as young ones. (Though it does make sense to teach the fundamentals at a young age.) I intend to adapt this story in other forms as time continues, but for now this is the best way to tell it as it fits the overall feel and experience I want the reader to have with the story.

Inhabitant seems deliberately light on details.  After stripping away any characters, dialogue, and even proper nouns, did you ever find it difficult to work within the constraints you set for yourself?

I did. Sometimes I found myself wanting to expand certain sections into much wider stories by interweaving prose, but I ultimately decided that it was best for the impact if I stuck to one form instead of bouncing between multiple styles. It just wasn’t coming together as I had envisioned. Once I did decide on a form, I enjoyed working in those confines. Choosing a road let me play around and have fun, using the page as a canvas where I could spread the words around in unique ways.

What sort of person came to mind when you pictured the main character?

As I was writing I pictured someone like me to help ground my brain into the story, but I don’t think the experience is limited to that type of person. The struggles faced, the worries felt, and the impact on our planet are universals that many can see. The identifying information of the traveler is intentionally nondescript to avoid limiting the connections any reader may have with the work. I struggled with this decision for a while. On one hand, you have the side of fully embellishing and creating every nook and cranny of the world inside the book, and on the other, you have the perspective to allow any audience member the opportunity to find themselves in the traveler. After much internal debate, I chose to leave it without much description since the story is within our character’s head.

How long did it take you to write Inhabitant?  Were there any poems that ended up on the cutting room floor?

This project had been in the works for almost a decade. I would start it, make good progress, become disappointed in what I’d made, take a long break, gain more life experience, return to make it better, and repeat. Right before the pandemic hit, I decided I wanted to finish it in 2020. Being forced into isolation gave me the chance to finally tie a ribbon on the project. There were a number of poems that I chose to cut. Some seemed repetitive to what was discussed already, so I took a long look at each poem and determined why I was having trouble letting go (even though I knew they needed to be dropped) to understand my attachment. Some were easy to remove as I could simply pull out the one perfect line and slide it into another section. Others were more difficult to part with for various reasons (some emotional, others I just really liked the image created, others just felt right), so I let them live on for another draft or two before eventually pulling out the best parts and cutting the rest.

Tell me a little about your decision to write Inhabitant in all lowercase.

This happened a little later in the process. Knowing full well I wasn’t the first or even thousandth person to want to write in that form, I considered not doing it. After contemplating, I felt it fit the style and look of the page better for what I was creating and the story being told. It also helped embody the traveler’s reluctance to fully assert themselves. As I came down to the wire, I compared a version with normal syntax and a version we see in the published copy, and I believe INHABITANT reads much smoother (to me at least) without the capitals.

Stories of this type usually see Earth destroyed for one of a handful of reasons.  Pollution, war, natural disaster, alien invasion, or something like that.  Why did you go in the direction you did?  Would you say it’s important to the overall story, or just a minor plot point to get things moving?

It was important to me not to have the Earth completely scorched as the traveler left. I wanted them to still see a possible life back home if they were able to change and learn from their mistakes. As Earth heals itself on a longer timeline, changing environments, overseeing extinctions, navigating through various stages of life, there are always parasites that take advantage of the land and eventually run out of places to hide. I used some of these ideas on different planets the traveler visits as well to show that these actions aren’t necessarily limited to Earth. Nature especially on remote planets looks to be a very brutal environment. Overall for the story, I wanted it to be clear that it was the decisions of civilization over time that caused the continued degradation of living conditions on Earth (even if they didn’t realize it at the time.) Not being a climate scientist, I wanted to avoid diving too deep into the specifics.

There was a point early on when I found myself wondering whether the main character was human.  But thankfully, there are just enough details thrown in about the inhabitant (like playing catch as a child) and Earth (Sahara, Amazon, our constellations, etc.) to make it clear.  Was it hard to limit yourself to so few details?

It was hard to limit myself, yes. I had to find a balance between including enough information to establish the character as from Earth using different types of poems to paint the picture of life before and including too many specifics that would either over classify or repetitively establish the background of the traveler. As I wrote, I wanted to include more and more landmarks, since life on Earth is filled with a plethora of amazing experiences, both grandiose and minute, so many beautiful wonders, and the mystery of what is waiting beyond the stars. I realized as time went on, that eventually I had to stop adding these moments or I would never finish the book!

At one point, the main character meets a… friend of sorts.  Can you tell me a little bit about why you chose this companion?

Ah, the spider. He’s based on a spider that lived in my car for a very long time. The relationship in the book went fairly identical to how it happened in real life. I’m not scared of spiders myself, but when they appear out of nowhere as you’re on the highway, it can be fairly startling. I considered finding a way to make it an alien creature of some sort, but the idea that another former earthling had made it out alive worked out too well to pass up.

What message are you hoping readers will come away with after reading your book?

I think the number one message I want readers to come away with is that there is hope. Whether that hope lies in repairing the home where we live on Earth or finding a new start away from a tumultuous environment, when you are able to take control of your journey, there is a light still to come. 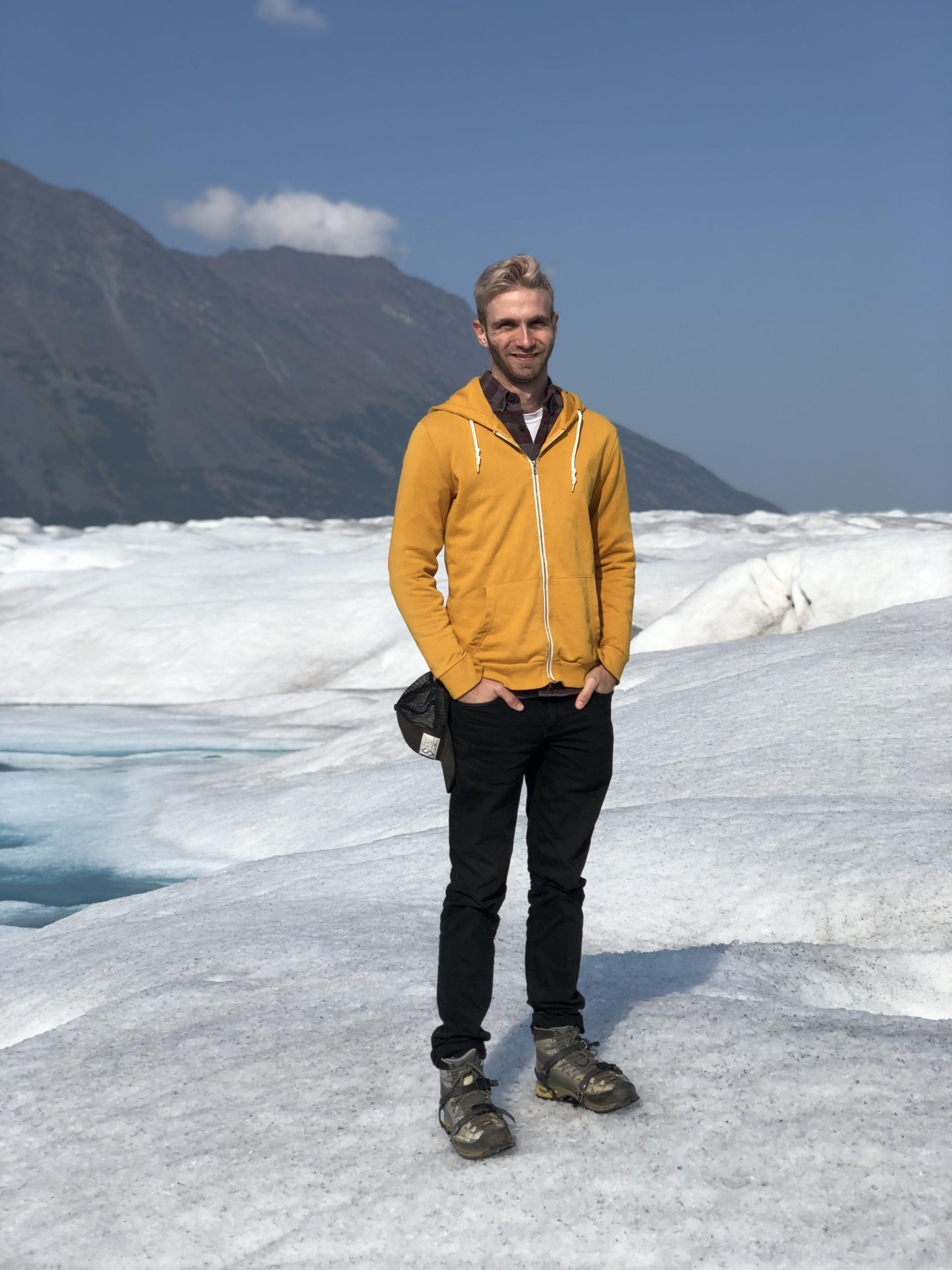 Charles Crittenden received a BS in Math and Computer Science from Webster University and a Master’s Certificate in Music Production from Berklee College of Music, recording and producing albums with several bands through the years. A creative type born and raised in St. Louis, he finds escape in art, music, and travel. Exploring themes of isolation and searching, Inhabitant was inspired by years of road trips, the nuance of the everyday, and the wonder of our planet. Find more at charlescrittenden.com