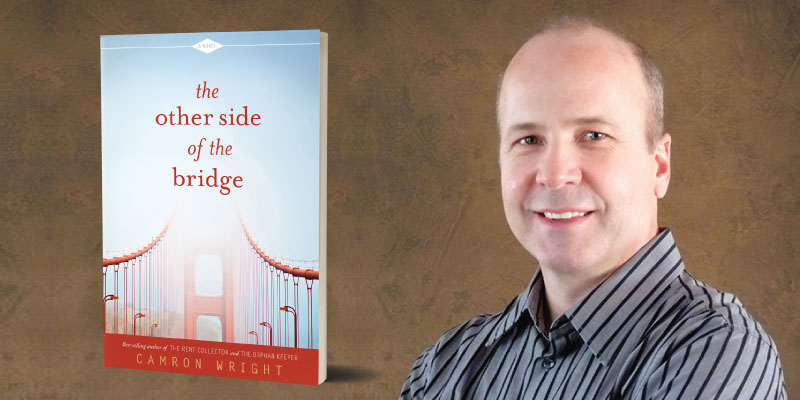 San Francisco Book Review’s Mandy Nevius talks with author Camron Wright about his new book The Other Side of the Bridge. 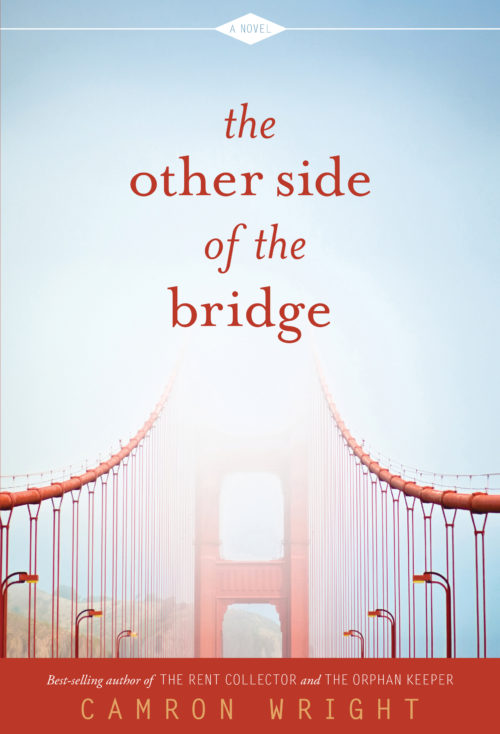 What inspired you to write The Other Side of the Bridge?

Many years ago, while I was still in my late teens (okay, many, many years ago), a friend shared a personal experience that I’ve never forgotten. With a smile slapped across his face and a gleam sparkling in his eye, he told me that the finest day of his life—the pinnacle of his very existence—would be the day he would ride his Harley across the Golden Gate Bridge. He said it would be the 4th of July, with a warm breeze blowing through his hair, the sun shining on his back, and strangers would longingly stare with awe and envy.

Here’s the thing: my friend wasn’t just a dreamer. He actually followed through on his vision, purchased a bike, loaded it with hope, and rode off toward the Golden Gate. “My little journey just didn’t quite play out as I had expected,” he later added. As he related his whole experience, I was spellbound—and his vision stuck with me. So much so that years later, I couldn’t help but write his quest into the plot of my story.

Were the people, stories, and letters about the workers of the Golden Gate Bridge real? How did you balance fact and fiction in this novel?

Yes, the historical background and stories about the bridge workers are both accurate and fascinating. If readers are interested in the bridge’s history, and the amazing men who built it, I highly recommend the book The Gate: The True Story of the Design and Construction of the Golden Gate Bridge by John Van Der Zee.

As far as the balance between fact and fiction, remember that I write novels. Yes, I absolutely want to present settings and situations that are realistic and accurate, since doing so helps support believability—but documenting history is not my job. While writers of non-fiction must focus on accuracy, a fiction writer’s goal is to keep readers entertained. I want the readers of my books staying up late at night, turning page after page, because they can wait to see what is going to happen next—that’s the level of connection that I strive to achieve. It’s an endearment that doesn’t happen when one reads the encyclopedia (no offense to any encyclopedia writers out there).

What was the most interesting fact about the Golden Gate Bridge that you discovered in your research for this novel, and how did you find this fact?

Perhaps the most interesting fact—considering the state of our bureaucratic world—is that the bridge was finished ahead of schedule and under budget, taking just four years to build. Also, very little federal or state money was used as most of the financing came from bonds. Local citizens actually put their own properties up as collateral to finance construction.

One of the most famous myths told about the bridge is that it’s repainted from end to end every year—but this is not the case. Painting is actually an ongoing task, applied to individual sections as needed. Regardless of the fact that the bridge is not completely repainted end to end every year, a whopping 5,000 to 10,000 gallons of paint are still used annually to recoat its sections.

There are a number of characters in your book that make negative assumptions about bikers. What was your goal in addressing this issue in your novel?

In today’s world, people are often quick to judge others based solely on appearance. If we see a tattooed Harley rider roar past sporting a beard and a worn leather jacket, we don’t naturally assume he is a Fortune 500 CEO. It’s a perception that needs to be challenged. For example, I have a few friends who ride: one is a dentist, another a mortgage banker, and the third an attorney, all extremely successful. In short, I was hoping to point out that our judgments about others—in all aspects of life—are often way off base.

Why did you choose to write a novel with two alternating narrators, and how did you go about writing their stories?

The Other Side of the Bridge is a story about coincidences that bring people together. To that end, we peek into the lives of the two main characters as they travel along their respective journeys. We presume they will meet, that their paths will cross, which they do, but not in the way most readers may expect. Alternating back and forth with the narration, as the story unfolds, with two paths that appear destined to collide, was the natural way to tell this type of story.

While you were writing about Katie and Dave, did you feel yourself more drawn to one storyline over the other? Why or why not?

In truth, I can appreciate both their situations and circumstance. Like Katie, there have been times in my life when I’ve felt stuck, when I’ve struggled to move forward. Like Dave, I’ve also faced difficulty—perhaps not to the same degree—but I’ve had moments where I’ve also wondered where to turn to find hope. I guess what I’m suggesting is that it would be very difficult to pick one character over the other as a favorite. Asking me to make said choice is like asking a parent to choose their favorite child.

Switching viewpoints was an easy way to help readers delineate between the two characters as the story moves back and forth between them. However, more important were logistical considerations: Katie is a character who is a bit stuck in her life’s journey and letting readers see her world from a first person narrative helps them to better relate to and understand her situation. Dave’s character, on the other hand, is slightly more complicated. His story screamed to be written in third person because there are others around him—namely his wife and children—whose actions play a critical role in the plot as it unfolds. They are actions that are critical to the story, but that Dave wouldn’t know about, such as Megan buying him a leather jacket. It all simply means that for Dave’s part of the story, third person was the obvious choice.

How do you write such relatable characters?

I try to create characters who are real by making them vulnerable: they make mistakes, they have regrets, they sometimes fail, they are never perfect. They are people simply trying their best to navigate successfully through life, the same as every reader.

In addition, I let them learn from their mistakes, even if it’s in unexpected ways—because we should all learn from our mistakes.

How did you come up with the quotable life lessons that appear throughout the book?

I listen and watch for lessons of life around me and I write them down when they happen. For example, I was walking out of Target the other day behind a man and his teenage son, a boy who didn’t appear to be very happy with his father. I watched the man put his arm around his son and I could tell he was about to spew amazing words of wisdom. Without being too obvious, I stepped close and pretended not to listen. The father bent low, pulled his son close and whispered, “It’s the father-son way—my dad drove me absolutely crazy, and it’s my job to drive you absolutely crazy.”

What message do you hope readers will take away from The Other Side of the Bridge?

Like my friend who thought riding across the bridge on his motorcycle would be the most glorious and fulfilling experience of his life, we all have a vision of how our lives will turn out. The problem is, like my friend learned, we often reach our bridges only to find they are cloudy, cold, and miserable. It’s how we react to these unexpected moments that will drastically shape our futures. To that end, I hope that people walk away with the realization that, while life can indeed be difficult—which it will be—the sun is absolutely 100% guaranteed to come out from behind the clouds and shine down again—because it always does. We just need to find the courage to wait it out. If we do, our waiting journeys across our own bridges will be life-changing.

READ our review of The Other Side of the Bridge. 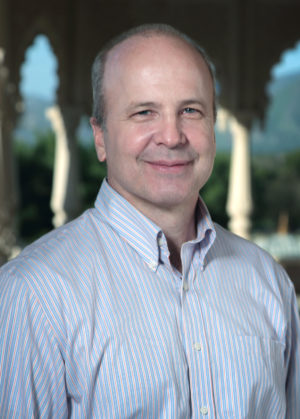 CAMRON WRIGHT was born and raised in Salt Lake City, Utah. He has a master’s degree in Writing and Public Relations from Westminster College. He has owned several successful retail stores in addition to working with his wife in the fashion industry, designing for the McCall Pattern Company in New York.

Camron began writing to get out of attending MBA school at the time, and it proved the better decision. His first book, Letters for Emily, was a Readers Choice Award winner, as well as a selection of the Doubleday Book Club and the Literary Guild. Letters for Emily has been published in North America, Japan, Australia, New Zealand, Germany, Korea, the Netherlands, and China.

His latest book, The Other Side of the Bridge, released in March of 2018.

Camron lives with his wife, Alicyn, just south of Salt Lake City at the base of the Wasatch Mountains. He is the proud father of four children, all girls but three.