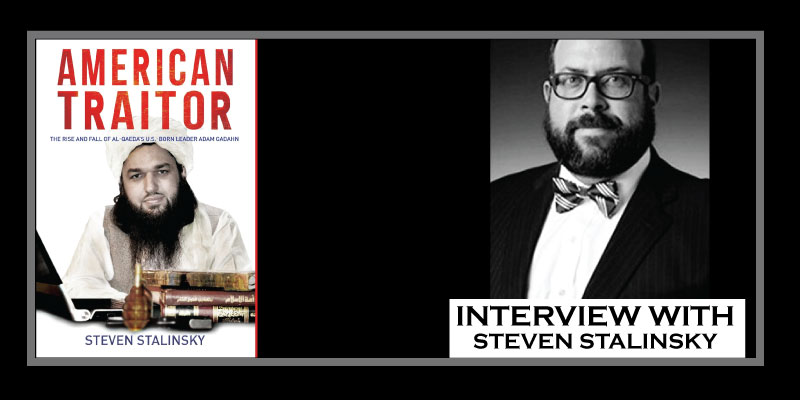 Your position at the Middle East Media Research Institute is very relevant to the topic of propaganda and terrorism, a repeated theme in the book. Adam Gadahn, the subject of the book, was a major propagandist for Al-Qaeda. But are there other reasons that Gadahn piqued enough interest to become the subject of research and a book? What questions did you want to answer in doing the research?

I first became interested in his story way back in 2006, and I first wrote about him that year in the New York Sun. Gadahn was the one of the first well-known figure in the War on Terror to be radicalized online – in his case, on AOL chat. What also fascinated me was his influence on Osama bin Laden and Ayman Al-Zawahiri, as well as his family background. Look at Al-Qaeda’s media arm Al-Sahab now – it has ground nearly to a halt since Gadahn’s death. It was practically a one-man operation, run by him – and that is how history will see him. While Al-Sahab media now puts out an occasional release from Al-Qaeda’s branches, these releases get little attention in the jihadi world, and the video productions are poor quality – ISIS supporters openly mock them and compare them unfavorably to ISIS media releases. Gadahn’s media work was considered to have cutting-edge production values for jihad media.

The book was written after Gadahn’s death. Much of its data seems to be from videos produced by Gadahn or featuring Gadahn, his writing, and some interviews with family members and other close associates. How would you describe your research methodology for the book, and why would you call it that?

At MEMRI, we use open sources, and all the material is openly available, as are his statements in both English and Arabic. His videos and his statements formed only part of the basis for the book; other parts were based on statements by his family, and on government statements and sources. I extensively examined many hours of his videos, and also some of his writing under a pseudonym – When the case against him was announced, his aliases were listed, and I identified some of his writings in the Al-Qaeda in the Arabian Peninsula magazine Inspire under those names. I also examined his network – his connections in the jihadi world and how those pieces of the puzzle all fit together.

What do you think is the value of the research and conclusions about Gadahn’s life, going forward?

Historically, it is going to be important, along with research and conclusions about Osama bin Laden, Al-Zawahiri, Al-Zarqawi, and others: He was the first American to lead a jihadi organization, and he brought a lot of modern elements into jihad. He is a key figure in the war on terror, and part of its story. As we approach the 20th anniversary of 9/11, people will look back more and more on that period, and with a historical perspective, his importance will be even more evident.

The book is very clear on the details of Gadahn’s short life and his increasing involvement in Al-Qaeda, penetrating its inner circle in terms of power and visibility. As a reader, I even understand how this happened—the early connections to radicals through the Islamic Society of Orange County, for example. But a mystery for me is “why.” Why would a young American with Jewish and Christian heritage raised in California abandon this life and transform into a leader in one of the biggest terrorist organizations in the world? What motivated him, do you have a sense? What made him “tick”?

He was looking for answers, and he found them. He was also easily influenced. As Sarah Olson, whose husband, Hisham Diab, had met Gadahn in the mid-1990s and who, according to her, indoctrinated him in jihadi philosophy, said after Gadahn was charged with treason in October 2006, “They’d been doing [the videos] since 2004 and the fact of the matter was it was him. I told people it was him. The streets running red in blood was the little spiel Khalil and Hisham used to give him. That was their mantra.” She said that Diab, and another extremist, Khalil Al-Deek, had taken Gadahn under their wing: “They were his friends. They took care of him…gave him a paycheck. He was very confused, really hurt… I don’t think he knew what he was giving up.” Basically, he was searching for something, and for a sense of belonging, and he found it with them; also, he believed in the cause, he was accepted, and he was given opportunities to make an impact.

In partial answer to my own question above, it has been suggested that Gadahn, still in his teen years when he developed close ties with members of a terrorist “sleeper cell” through the Islamic Society, was unduly influenced by people like Dr. Siddiqi, a man with known terrorist connections. Do you think Gadahn was exploited by people like Siddiqi?

I do think he was easily influenced and was also exploited, but not by Siddiqi. Siddiqi could be described as moderate in comparison with some of the others at the mosque, but of course, he did invite the Blind Sheikh to speak there, and, as the book states, the mosque bookstore had many Muslim Brotherhood books.

Gadahn, before his interest in, and eventual conversion to, Islam, was an enthusiast of “death metal” music, writing reviews of music in the genre. Do you see this interest as related to his later life?

No, but in interviews, some of his friends from that time were asked about how he acted. While his interest in music appears to have had no impact later in his life; he discussed it in an extended article by him that was published posthumously in Resurgence. But he did learn, from an early age, video and audio production, thanks to his aunt, and some of the musical experience he had transferred over to producing videos – so, yes, there were elements he did use later for Al-Qaeda.

Although some members of Gadahn’s family, such as his aunt, describe Gadahn as a “typical” teenager and his early years unremarkable, even happy, the later events of his life suggest otherwise. What would you say were the most influential events or elements of Gadahn’s early life?

Because of his parents’ 1960s counterculture background, and, as the book details, his early life off the grid, growing up in a shack in fairly primitive conditions without television or even electricity, he had a lot of freedom and permissiveness to develop his beliefs. His neighbors, who were interviewed, all said that he was somewhat strange. However, in his own words, he had problems at home and for that reason went to live with his grandparents. He also said that his father sold halal meat to Muslims, and that had an impact on him and was his first point of contact with Islam. In the interview in Resurgence that was published posthumously, he even claimed that his father was a Muslim.

Going back to this theme of motivation, I am most struck by the videos featuring Gadahn and the anger and hate that comes through, especially for “the West” and the United States. Given that Gadahn was raised in the United States, his hatred seems odd. What do you see as the source of this hate?

He was a member of Al-Qaeda, almost from the time of his conversion to Islam at the mosque and his joining the jihadi sleeper cell. This was most likely instilled in him at the mosque, when he converted; he would then go on to Afghanistan to train with Taliban and Al-Qaeda prior to 9/11. In interviews with his family, they expressed shock at this, but that would be an expected response.

Leaving Gadahn’s motivation, I’d like to put his life in a broader context. What are your thoughts on the organization of Al Qaeda and its eventual evolution into Isis as related to Gadahn? How much influence did Gadahn really yield? Or was he more of a tool?

His influence was huge. He ran Al-Qaeda’s media organization for years and was the organization’s main English speaker until Al-Awlaki; he influenced bin Laden and Al-Zawahiri in their understanding of the U.S., and more. He understood before anyone else in the jihadi world the importance of putting videos online and getting them to Al-Jazeera for release; he was a vital part of Al-Qaeda’s media outreach strategy. Also, when social media first emerged, he discussed the importance of an Al-Qaeda social media presence.

What would you say has been Gadahn’s “legacy”? Has his life led to permanent change within ISIS [Al-Qaeda], with U.S. policy? If so, how?

His death has seriously harmed Al-Qaeda’s major outreach efforts – these efforts nearly died when he did. No one has filled the void left by his death; Al-Qaeda’s media efforts have dwindled significantly in comparison with the 15 years after 9/11. There was just no one to take his place, and Al-Qaeda media productions have long since been eclipsed by ISIS media productions.

Read our review on Manhattan Book Review of his book, AMERICAN TRAITOR: The rise and fall of Al-Qaeda’s U.S.-Born Leader Adam Gadahn.