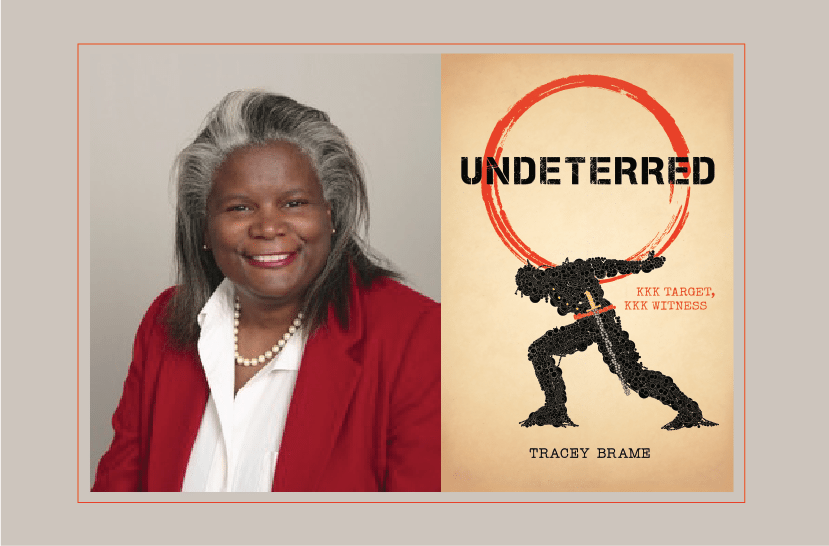 Tracey Brame took an oath to serve the nation at the United States Military Academy. When she revealed an interest in entering politics during formation, a cadet violently attacked her. Brame subsequently suffered post-traumatic stress disorder and a dangerous memory loss known as dissociative amnesia, in which the victim cannot recall suffering a traumatic attack. She kept charging through her West Point duties oblivious to her condition.

After serving her commission time, Brame took a job back to her home state of Indiana. Again she expressed an interest in entering politics, and again she paid a price. The Ku Klux Klan, who did not want an educated African American woman to run for an Indiana office, targeted Brame for continued, organizational crime and harassment. She moved from Bloomington to Indianapolis, but the KKK pursuit—ordered by two grand dragons, a father/son duo, both doctors—continued.

Undeterred KKK Target KKK Witness is a gripping memoir of one woman’s perseverance over adversity. You can read Philip Zozzoro’s interview with Brame below.

Tell us a little about yourself.

I laugh a lot –usually about myself. I chuckle about my upbringing and know that my grandparents overcame odds to raise me. I was an “old-head,” taking after Mama and Papa as early a kindergarten all the way through adulthood. I thought my 64 Crayolas were worth something, so I took care of them as best I could, because they made the world on paper brighter.

I’ve been in sells since exiting the military. Sells are about helping others solve problems in their personal lives or their workplace. I enjoy helping people

I have never given up. I’ve always found something worth carrying on—family, work, and the hope of meeting that special someone. I, alone, was worth carrying on—me, the little strange person raised on Sanwela Drive. I like myself.

What made you decide to tell your story?

It was involuntary really. Jewel and I had worked on so much terror and trauma. I could not fathom why the people—men and women of Bloomington were so evil to me. I could not explain why I defended myself so little. When I came out of shock about who they were, which my mind had blocked as perfectly as what they, did I sat down the last Monday of October 2014 and walked away that Friday with a complete first draft, which I sent to my West Point instructor. He asked of my intentions. I declared I would publish my story, but first I had final semester exams for my dual Masters degrees in mid-December.

Had you ever thought of writing before?

Mrs. Libby was our English teacher in the high school gifted and talented program. She encouraged all of us to write a book. I could not think of what to write about in a book. I thought I would wait, not force the issue, until something hit me. (Laugh) Something hit me.

Is PTSD able to be overcome, in your opinion?

Yes, it depends on the person. Some people may not want to overcome PTSD, because not facing their fears brought on the disease, and having to face them anew may prove so uncomfortable the person would rather remain in the shadows of PTSD.

Time does wonders to overcome PTSD, if you use that time wisely. Therapy seems to be a most important necessity. I suggest a regular therapy time every two, three, or four weeks. Desensitizing yourself to the trauma that triggered your shock, so that you can reprocess those emotions naturally, helps. Of course, these ideas speak to addressing what went wrong in the past. Being stronger in the present and future requires mindful thinking so as not to repeat the past. Many people stop experiencing shock with time, where time is 1 month, 1 year, or 10 years. It’s hard, dedicated, daily work really.

How would you deal those who discriminated against you today?

The chances that the person targeted by crime did nothing to ask for it are good in many cases. I was studying at West Point and doing a pharmaceutical job in Bloomington, nothing that would rise as reason to hurt me, save for a psychopath. Jewel (the character name given to my therapist) always told me that I should not confront such criminals. I only have once. Professional criminals lie.

Did your story come out all at once when you started writing or did it take some time?

My story came out soon before I started writing as a series of many flashbacks over the years. I captured them with the book over five days. Remember that I was finishing two Masters degrees and had semester exams within a month and a half. I did not know that I was going to write a book, but rather simply take some notes and outlines of recent flashbacks. The book became a force of nature, refusing to stay within me once I started typing. As I covered people that had helped me and passed, I cried, grieved really, for they were not meant to be here to see the fruits of their invested time.

Do you have a writing process?

I write in flurries. Once finished I read more carefully and edit. I have met a tremendous editor placed in my life by God, who I think is a great friend in the business. I hope to make more friends as I progress.

What do you hope to accomplish with the publishing of your story?

Veterans do not have less free speech because angry men despise their potential. I’m simply standing up for myself and perhaps for others, too.

Speak up. No one can help you if no one hears you. Speak up.

Do you have any literary influences?

I read whatever was present. I grew up reading my mother’s Stephen King novels until a teacher asked my grandmother to take the books away from me. I remember reading Langston Hughes’ poetry, Ralph Ellison’s Invisible Man, Martin Luther King speeches, and Malcolm X’s autobiography. In later years I liked Maya Angelou, Alice Walker, Toni Morrison, Frank McCourt, Jeannette Walls, and Patricia Cornwell.

I laugh to think how my mother would answer this question when she appreciated practically every book written. What an avid, fast reader she was.

Where do you see the persecution you experienced in current society? Is it as transparent?

Exactly where I experienced it—in states with high KKK concentrations. We discount their numbers and concentrations; therefore, we overlook their tactics to rule themselves and those around them through Klan philosophies. Look for places trying to legislate group destitution and hate. It’s not always transparent, but we should celebrate the individual’s willingness and courage to stand up.

TRACEY BRAME originally from Indianapolis, graduated from the US Military Academy at West Point with a degree in political science. Since then, she has earned dual Masters degrees from the Kelley School of Business and the Thunderbird School of Global Management. She is the owner of West Point Financing.