Interview with Olivia Kate Cerrone, author of The Hunger Saint 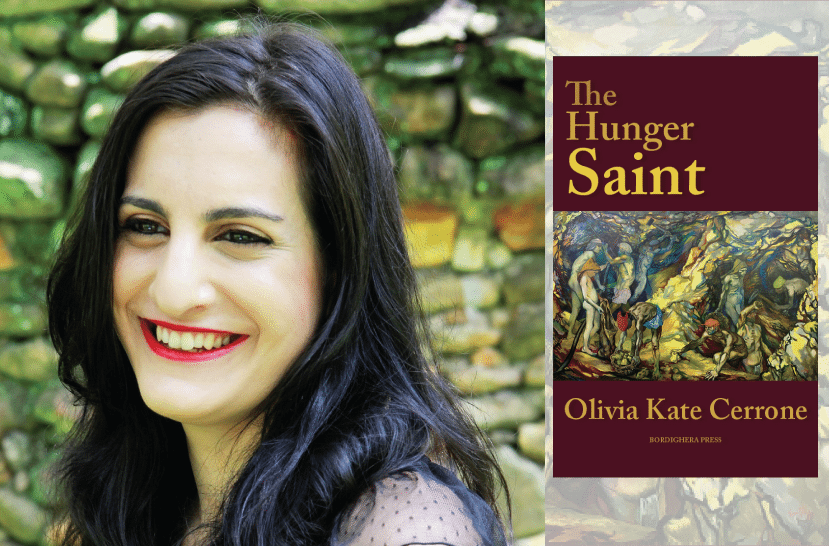 OLIVIA KATE CERRONE’s Pushcart Prize-nominated fiction won the Jack Dyer Prize from the Crab Orchard Review. She’s received various literary honors, including residencies at Ragdale, the VCCA, and the Hambidge Center, where she was awarded a “Distinguished Fellowship” from the National Endowment for the Arts. The Hunger Saint (Bordighera Press, 2017), a historical novella about hope and survival set in Sicily, is her first book. She currently resides in Boston, MA. San Francisco Book Review’s Jane Finch talks with Olivia about The Hunger Saint.

You state in the Acknowledgements how you first heard of the carusi, so had you always intended to write the story from a carusi point of view?

As a fiction writer, I strived to create a compelling story that brought to life the history and the struggle of the carusi in an engaging way. Literature so often serves as a powerful means of offering an intimate, more nuanced portrayal of history through language where complicated realities can be examined. I write character-driven fiction, so for me everything begins with the protagonist(s) driving the story forward. Yet I knew that in reimagining and writing from a caruso’s perspective, I would first have to immerse myself in a great deal of research in order to honor the truth of their experiences.

You have clearly researched extensively. How long did this take you?

About five years. I first learned about the carusi in 2010 while taking a Sicilian language class in New York City, and from that point on, I devoured everything I could find on the subject—books, essays, music, films, art. I soon realized that little had been discussed regarding the carusi, so this eventually led me to journey to Sicily in 2013, where I conducted oral histories with those surviving sulfur miners of neighboring towns in the region of Enna. Throughout this time, I worked on different drafts of The Hunger Saint, with research informing the shape and complexity of the narrative. During this time, I was very fortunate to have established connections with both Italian American and Sicilian scholars and intellectuals who helped guide me through this process.

Why did you initially put your manuscript away and not complete the story?

The Hunger Saint was originally part of a full-length novel manuscript involving a contemporary plotline that spoke to present-day challenges and concerns in Italian society. Although excerpts of the manuscript were published in both Italian and English journals and won some awards, such as a “Conference Choice Award” from the 2014 SDSU Writers’ Conference, I was unable to secure a publisher for the book. So, I had to rethink the manuscript entirely. What was really important to me was sharing the story of the carusi, because so very little has been written about this history. This haunted me, especially considering the countless number of children, some as young as six years old, who suffered and died under such brutal conditions. Their story deserves a much larger spotlight. I am grateful that Bordighera Press, a longtime quality publisher of Italian and Italian American authors, was enthusiastic about publishing the book as a historical novella.

Do you have any plans for a follow-up on Ntoni’s story?

While anything is possible, right now I am working on a novel called Displaced, which focuses on human rights issues involving immigration, intergenerational trauma, and deportation in the U.S. I am definitely a writer whose work contains a social consciousness.

Have you ever visited a sulphur mine or the location of a mine?

Yes, in 2013, I was very fortunate to visit the now defunct Floristella Grottacalda mines in Valguarnera Caropepe, which, since the mine’s closing in the 1980s, have been turned into a national park and labor museum. I worked with Dr. Salvatore Di Vita, the former museum director, in accessing the grounds as well as gaining a deeper understanding as to how the mines operated and were so dangerous for those miners working within them.

How did you choose your characters and their names?

I love Sicilian literature, especially the work of Giovanni Verga and Leonardo Sciascia, whose verismo style, or realist approach to storytelling, offers such a rich and compelling observation of the difficult socio-economic conditions that affected the lives of Sicilians and drove so many to immigrate to the United States in the late nineteenth century. Some of the names, like Ntoni’s for instance, were inspired from these stories, while others derive from folk songs and art.

Have you returned to Sicily since completing the book?

No, but I hope to in the future. There has been some talk among friends and colleagues of possibly translating The Hunger Saint into Italian, which might help foster some fantastic opportunities to connect with new readers and spread further awareness about this history. When I was in Sicily in 2013, I was surprised to encounter many young Italians who did not know who or what the carusi were.

While writing the book, did you find that your characters seemed real to you?

Absolutely! For me it is essential that the characters driving a story be as real and complex as possible. One way I strived to accomplish this was to pay special attention to incorporating as many specific, felt-life details about the characters throughout the narrative. Through language, I wanted to foster an emotional connection between readers and the characters at hand to help make the story more meaningful and haunting. A good way to do that is through focusing on those sensory details that really work to bring a character to life on the page.

Have you thought about including photographs or illustrations in the book?

If the book had been nonfiction, I would have definitely used more photographs or illustrations throughout the book. The magic of fiction allows readers to create vivid representations of the story and its characters in their minds, which adds, in my opinion, more power to experiencing the story itself. However, I was very happy that my publisher and I were able to obtain the rights to use Renato Guttuso’s La Zolfara as the cover art for the book, as that painting really captures the essence of The Hunger Saint.

The title is amazing. What made you choose The Hunger Saint?

Thank you so much. Titles are always such a challenge for me, but in writing and revising the many drafts of The Hunger Saint, I remained sensitive to the desires driving these characters forward in the face of so many challenges and sorrows. Sicily was no stranger to severe poverty and famine. What enabled these people to keep going? Many are rooted in faith but others are buoyed on the possibility of change, the hope of a better life for themselves and their families. Their dreams, even one as simple as reaching the ocean, enabled them to endure and survive.

READ our review of The Hunger Saint.