Pseudonymous Bosch and Shane Pangburn, Authors of The Unbelievable Oliver and the Four Jokers Book 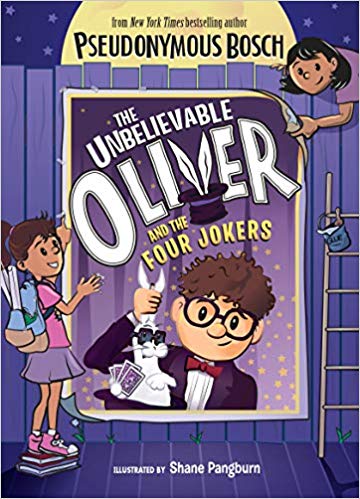 Pseudonymous Bosch, New York Times bestselling author of THE NAME OF THIS BOOK IS SECRET series, will be visiting for a PIZZA PARTY on Monday, May 20th at 7:00 p.m. He will be talking about his new book, The Unbelievable Oliver and the Four Jokers.

From the author of the bestselling Secret Series comes this funny chapter-book mystery about a third-grade magician and the wisecracking rabbit who is the secret brains behind his act.

Eight-year-old Oliver dreams of being a professional magician, even though he has terrible stage fright. And now, his friends Teenie and Bea have gotten him invited to a classmate’s birthday party as the paid entertainment! Desperate for help, he visits The Great Zoocheeni’s Magic Emporium, but comes away with nothing more than a moth-eaten top hat.

Oliver is in for a lucky surprise, though. Inside that top hat hides a wisecracking rabbit named Benny, who agrees to help Oliver with his act. But at the party, Oliver is accused of robbery! He’ll need to solve the mystery of the missing robo-cat to clear his name before he and Benny can amaze the crowd with their grand finale.