Doreen Stock, Author of In Place of Me 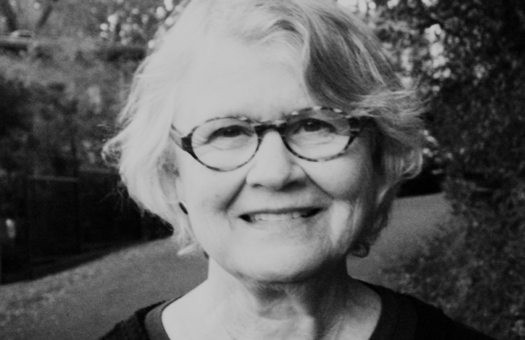 Doreen Stock is a poet, essayist and memoir practitioner who has been exploring creative nonfiction for thirty plus years from the feminine point of view as a wife, mother of three, single human, and grandmother of eleven. Her first book of poems, The Politics of Splendor, was part of a New American Writers exhibit at the Frankfurt Book Fair that year. It combined her own poetry and prose poems with her translation from the work of Marina Tsvetaeva and Anna Akhmatova.

While raising her three children, she wrote two book-length memoirs: FIVE: The Transcript of a Journey, detailing her family’s travels through Europe in a VW van, and My Name is Y, an anti-nuclear demonstrator’s family memoir. She was also a small press (D’Aurora Press) editor and publisher at that time.

The Bookcase, a memoir exploring totalitarianism and the self, was begun in Amsterdam in the eighties, and after that, Rani, describing Stock’s first five-month stay in Tel Aviv and Jerusalem. During seven years of travel in the nineties, she composed several collection of poems, Memorial Service, Poems of Arad among them, and the essays which eventually became, On Leaving Jerusalem: Prose of a Traveling Nature.

Q. In Place of Me is a selection of your poems assembled and introduced by Jack Hirschman. Could you tell me a bit about your history with Hirschman, and how this collection came about?

A. Jack Hirschman was my lit professor at UCLA in the early sixties.  Royce Hall was a huge lecture space, and he filled it completely with his dynamic oral readings of the novels he was teaching: Mrs. Dalloway, Nightwood, Ulysses, etc. Ten years later I chanced upon him reading his own stirring political poems and translations at Intersection for the Arts in North Beach, SF. and there began our long literary friendship, as we were both translating from the Russian at that time. Fast-forward thirty-five years. He was the featured reader at a series in Sausalito, heard a poem I read that night and afterward said, “Do you have any more of those?”

“Jack, I have a lot more!” He looked at me intently.

“Have you been true to the poem all of these years?”

“Send me everything you’ve got!”

I spared him that request and sent only the most recent ten years of work, all collected into chapbooks, from which he created In Place of Me.

Q. Could you describe the North Beach literary scene of the 70’s and 80’s for us?

A. I was somewhat removed form the North Beach literary scene as I was living in Mill Valley, raising three young children. But I became part of Barbara Gravelle’s woman’s writing workshop at Intersection for the Arts, and when we had worked up enough steam in our poetry she got us a reading at The Coffee Gallery on Grant St. That night ruth weiss was the MC, and after the reading she came up to me to compliment me on my work. This was the beginning of another long literary friendship. I edited and published her work in Single Out, years later, as well as a translation from the Russian by Hirschman, titled simply Hunger. I also traveled to the readings at Intersection (which was then located in the heart of North Beach on Union Street) whenever I could, and it was there that I found George and Mary Oppen, as well as Stephen Kessler. These life-long friendships enriched my writing life, which was often solitary and sandwiched in between domestic duties. I began a reading series in Mill Valley at the library, and invited many North Beach writers to read there. One day I had all of North Beach spilling out of my little Mill Valley house to celebrate with my friend, Eugene Ruggles when he first read from his beautiful collection, A Lifeguard in the Snow.

Q. In the Introduction to ‘In Place of Me,’ Hirschman notes that he is especially moved by your poem for Tookie Williams, ‘Redeemed Criminal Being Executed,’ which he finds himself reading again and again. The poem features you not at the jail, but swimming in a lighted pool. What motivated this contrast?

A. I was part of a task force from my San Rafael synagogue to educate ourselves and demonstrate against capital punishment at San Quentin. We went whenever there was an execution by lethal injection and demonstrated until it was over. On the night of Tookie Williams’ execution there was a huge traffic jam on the way to the prison. I felt myself to be superfluous at such a scene and turned back to San Rafael, and my swimming pool at the local JCC. Thus this poem, unlike others I’ve written on the subject, was actually partially composed during that night swim, and the simultaneity evoked in it was real.

Q. The other poem that Hirschman notes in the Introduction, that I found especially haunting, was the poem “Cho,” about the Virginia Tech shooting. In it, you say “Carnage is not a word for a poem,/but that’s where we are…” Does this explain, in some way, your choice to write about tougher subject matter?

A. The role of a poet in his/her society is being addressed here. In addition to “the poet as cheerleader,” as happened at the Virginia Tech graduation that followed the massacre, I feel that my own role is to witness the trauma in its emotional intensity and try to glean meaning as well as memorialize the fallen. Poets are part of the national utterance. We are not journalists, but we must try to mirror the times in which we live.

Q. The poems in this collection are assembled in reverse date order, from most recent to earliest, except for the ending collection from 2009. Reading through your work in a retrospective way, how do you feel you’ve evolved?

A. In the nineties I was on the move a great deal, primarily healing myself from my divorce. Those earlier poems, written in seven years of travel, were generated in a wandering mode. They do not suffer from this, because in a certain way the naïveté of the journeyer can intensify the impact of a scene or event. But my later work, such as the two poems you mentioned previously, are more grounded in present American realities. Also, as I have grown, the politics of any given situation has become far more nuanced. I’m not sure that this is evident in my writing, however.

Q. You’ve worked as a translator, editor, and publisher. How have these many roles influenced your own work?

A. Literary translation has been my on-going private poetry workshop. What greater way is there to learn about language and the poem than to struggle with this endeavor? In addition, the women poets I’ve worked in, Anna Akhmatova, Marina Tsvetaeva, Gabriela Mistral, and Alejandra Pizarnik are great teachers. Nothing enlarges perspective, suggests themes, ideas, and humbles one more than working in this way.

As for editing and publishing, these experiences have made me aware of the terrific amount of work, creativity and attention to detail necessary to produce even one such artifact… Long Live the Book!

Q. Some of your poems take place in Jerusalem—you’ve spent time in both Tel Aviv and Jerusalem. Can you talk about how your time there affected your work?

A. Again, literary friendships are the life blood of a writer’s life. I was fortunate to meet the writer, David Ehrlich, in his remarkable bookstore/café ‘Tmol Shilshom in Jerusalem, as well as many great Israeli writers and thinkers in the space he has created for them. But also, the two great Israeli cities you mention, very different from one another, have shown me their streets, their essences, their people. They are a part of my consciousness. In fact, an entire book of personal essays, On Leaving Jerusalem, Prose of a Traveling Nature, came from my time there.

Q. Although your poems travel from Jerusalem to Spain, they always come back to the Bay Area, as you are a local North Bay author. Has the Bay Area’s evolution affected you in any way?

A. I have a slightly mournful sense that we are becoming an on-line literary community due to the rise in housing costs (See Rebecca Solnit, The London Review, on this subject).  But the vitality of the SF bay area writing scene is attested to by PoetryFlash, our local rag-become-electronic review/calendar. And I still feel a sense of community when I participate in events of The Marin Poetry Center (of which I was a founding member,) and when I go to Reader’s Café at Fort Mason, where Jack Hirschman still hosts a weekly reading series, and when I meet with monthly with a small response group of poets under the auspices of Jackie Kudler.  Our local independent bookstore, Book Passage, has been invaluable in supporting independent publishers and creating a vibrant cross-pollination of writers and readers.

Q. Do you have a favorite poem from the collection that you can tell us about?

A. The title poem, “I Was Swimming.” Again, it is one of synchronicity. As the horrors of 9/11 were happening, I was taking my early morning swim. Then I went to check on my elderly mother, who was watching TV, and I found out about the enormity of what had happened. The title of this book, In Place of Me, refers, in part, to my feeling that all those who died that day were taking my place in an international drama that continues to unfold at this very moment…

Q. You’ve gone from being a writer, to a writing mother. You even traveled with your family across Europe in a VW van, and found time to write a memoir of that! What advice would you give to women out there trying to make time for their children and their writing?

Q. Now that ‘In Place of Me’ has been published, what is up next for you?

A. I want to read In Place of Me to as many people as I can. I am trying to schedule readings in LA, St. Paul, Minn. (my birthplace), and NYC. Someday I would like to read it at ‘Tmol Shilshom in Jerusalem as well.

I want, also, to find a publisher for my historical novel, a triptych of novelettes based on Jewish artifacts: two parchment letters, a stone epigraph, and eight Egyptian papyri, which have been juxtaposed to resonate with one another.  All three concern the lives of women.

And I’d like to find an editor/publisher for my next book of poems, Not Being Bombed.