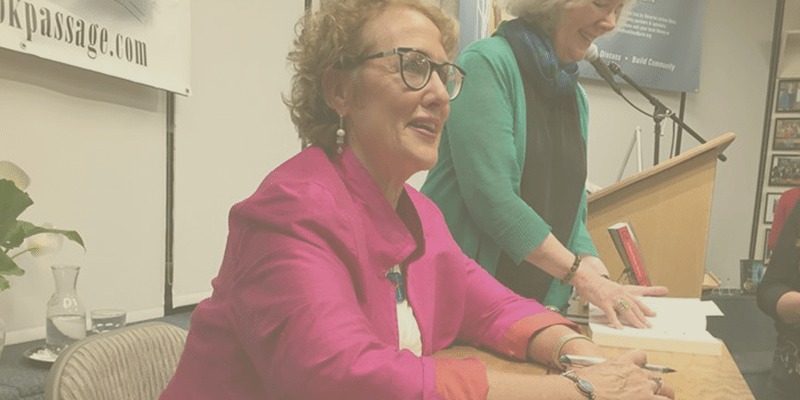 Book Passage in Marin County’s Corte Madera was the site for Amy S. Peele’s comic and compassionate introduction of her debut novel, Cut, to a crowd of nearly one hundred people last month. Standing-room-only is rare at any book launch, but Peele’s was marked by eager cheers, a rousing introduction by author Betsy Graziani Fasbinder, hilarious readings, and a crash course in the mysterious world of human organ transplantation. 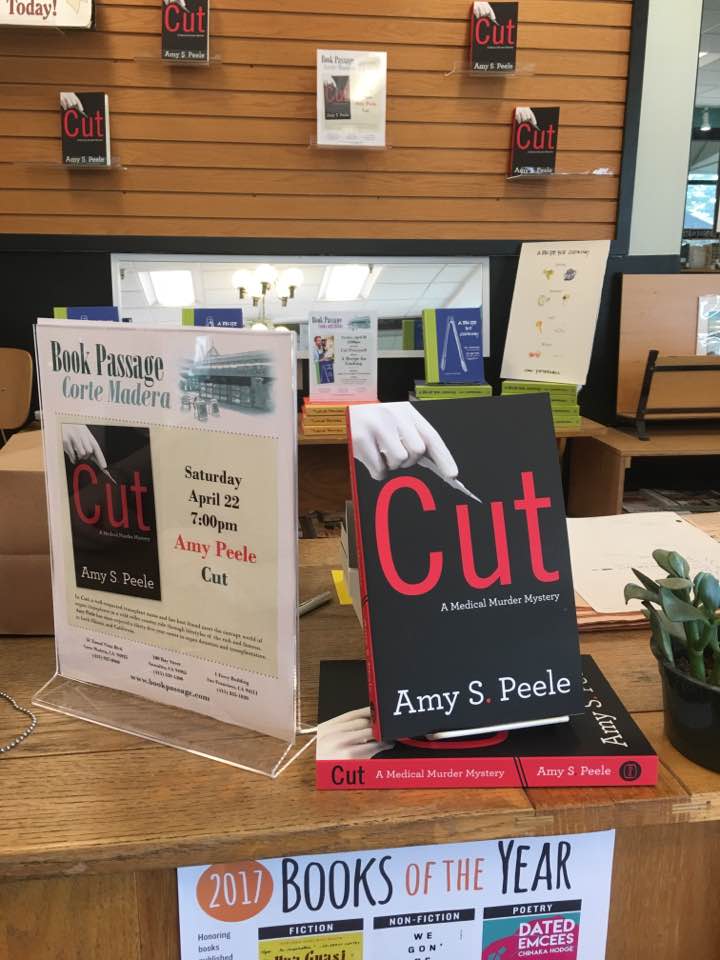 This surprising novel ponders the length to which the morally compromised might go to snag a new organ and examines whether it is possible to buy one’s way to the top of the organ transplant list. How does the process work? Who are the players, in the best and worst case scenarios? The plot of Cut, Peele’s raucous, and sometimes bawdy, murder mystery, grapples with these questions while careening down a twisty, page-turning, nerve racking, lusty, and occasionally heart-wrenching path to the answer. 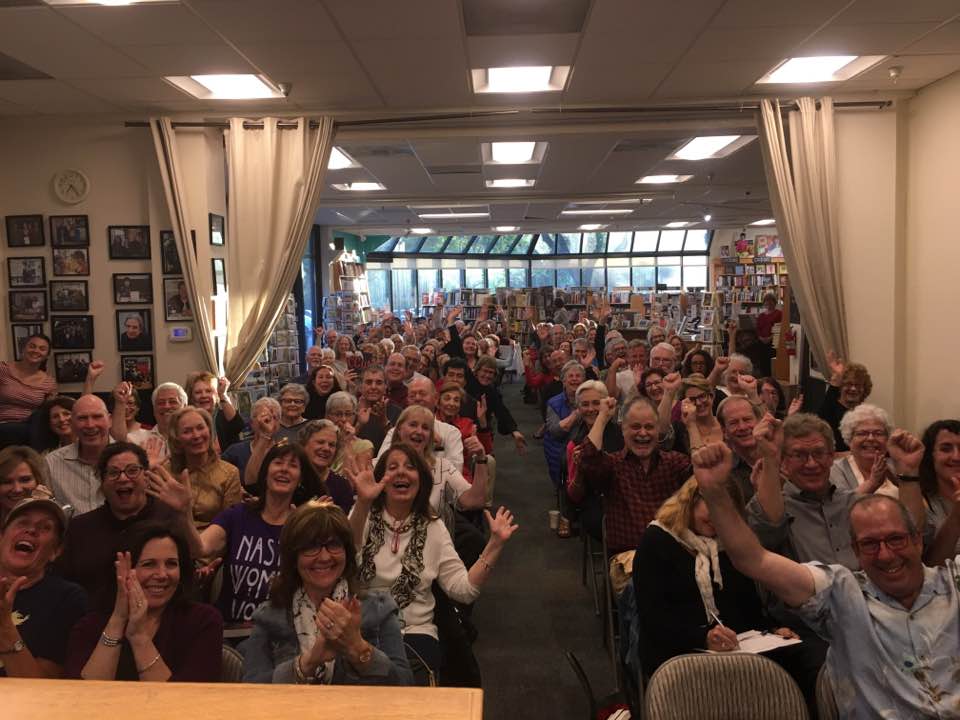 Told in the third person, the book’s bold characters include a wealthy female executive from San Francisco (a snob through and through), her ne’er-do-well boyfriend, two protagonists who are nurses by training and amateur sleuths by desire, a Latino family grieving over the recent murder of their son/brother by Florida gang members, a dignified surgeon and his socialite wife, bikers and bartenders, and the obligatory long-suffering police. 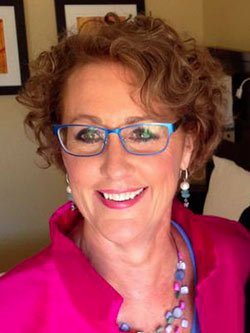 A reader could not ask an author to have a more intimate knowledge of the subject her fiction than does Ms. Peele. She graduated from nursing school in 1974 and began her career caring for kidney transplant patients at the University of Chicago. She became a transplant coordinator there in 1976, coordinating the recovery of organs and tissues from the operating room, working patients up for transplants, managing the waitlist, and caring for patients through their post-transplant days. In 1982, she spoke at an international conference in Belgium about the transplant coordinator’s role in the U.S. In 1984, she traveled to China with a medical delegation, representing the transplant specialty. She accepted a transplant coordinator supervisory position at the University of California at San Francisco where she worked her way up the ranks until 2014, when she retired as Director of Clinical Operations for all solid organ transplants.

Peele was one of the pioneers whose work led to the establishment of NATCO, the North American Transplant Organization, for which she served as president from 1983 to 1984. In that role, she traveled to Washington to educate politicians about the organ donation and distribution process.

The National Organ Transplant Act was passed by Congress in 1984. It called for a national network to coordinate the allocation of organs, and to collect clinical data about organ donors, transplant candidates, and recipients. In March 1984, the United Network for Organ Sharing (see www.unos.org) was incorporated as an independent, non-profit organization, and was funded within a year. Its initial contract was for developing the requirements for the operation of the Organ Procurement and Transplantation Network (see https://optn.transplant.hrsa.gov/).

Ms. Peele has been interviewed on Phil Donahue, as well as local and national radio stations, discussing the National Organ Transplant Act. She currently chairs the UNOS Transplant Administrators Committee. She has written extensively in her field and remains active in writing about her life and teaching on topics concerning human wellbeing.

Peele’s previous book, a memoir entitled Aunt Mary’s Guide to Raising Children the Old-Fashioned Way (She Writes Press 2009), is a collection of short stories comprised of the author’s childhood memories of life in Park Forest, IL in the 1950s. She explores the chaos, clamor, moments of peace, and life lessons learned there, generously suggesting that parents and relatives do the best they can with the challenging circumstances in which they find themselves

In addition to her talents in the medical field, Peele has a finely tuned funny bone and appreciation for the absurd. She graduated from the Second City Players Workshop in Chicago in 1985 and has studied improv at Bay Area Theatre Sports in San Francisco. The results are evident in the dialogue and antics of some of her characters, and in her public speaking.

A little hilarity is welcome counterpoint to the somber themes of Cut’s tender world, where new body parts are essential for survival and are only ever available as a byproduct of human sacrifice. In Peele’s novel, we see humanity’s worst traits meet its finest. Greed and ambition are surrounded by selflessness and kindness. Fear and insecurity struggle with courage and tranquility. Technology and training are constrained by timing and circumstance. And in the end, death is the great equalizer, master of all.

Those interested may meet Ms. Peele and hear her speak during the She Writes Press Mystery Authors Tour in several California locations this summer, in Emeryville, Corte Madera, San Francisco, Palo Alto, and Encinitas. In the fall the tour will head for the Chicago area and beyond. Updates will be posted at http://amyspeele.com. 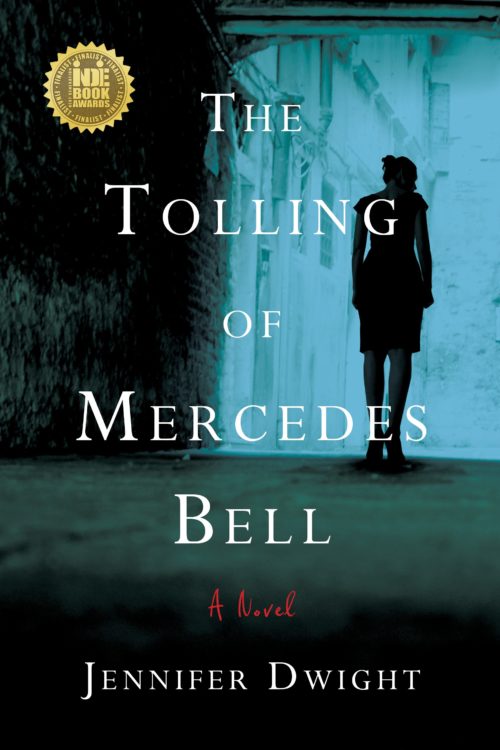